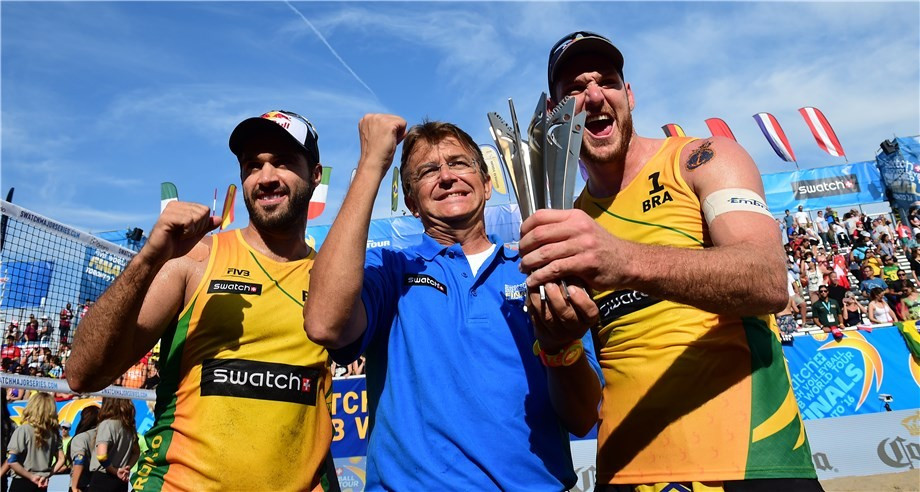 The Brazilians provided one of the moments of last month's Olympics for the host nation when they triumphed in the men's beach volleyball final on Copacabana Beach, against Italians Daniele Lupo and Paolo Nicolai.

They waited a month before returning for the Finals in Toronto, and saw off Evandro Goncalves and Pedro Solberg, 21-19, 21-19 in a hard-fought final.

"The main thing I said at the beginning was ‘Alison, let’s just have some fun, we don’t have to prove anything to anybody, let’s just play with our hearts like we always do,'" said Bruno.

"And when we play like this, we know we play strong and competitive."

Their victory means the Brazilian pair have now won the season-ending event for two seasons in a row.

"The Olympics were the results of our career," Bruno added.

"We didn’t realise what we did, but it was so stressful, we were so nervous, we wanted that title so much.

"The people want to help us but at the same time, they put so much pressure on our shoulders."

In the women's competition, the Rio 2016 Olympic champions were also triumphant as Germany's Laura Ludwig and Kira Walkenhorst got the better of Swiss pair Joana Heidrich and Nadine Zumkehr, 21-18, 21-16.

At the Olympics, the Germans disappointed the hosts by beating Brazil's Agatha Bednarczuk and Barbara Seixas in the final and they were in superb form again in the Canadian city.

"It was great to come back and win the trophy after losing our first two matches," said Ludwig.

"We defeated four very great teams to reach the top of podium.

"It has been a long season with a lot of pressure-packed matches.

"It was all worth it.

"The gold medal win is special since it validates our work the past four years together."

The bronze was won by Switzerland's Isabelle Forrer and Anouk Verge-Depre, who beat Brazil's Larissa Franca and Talita Antunes, 21-19, 21-18.