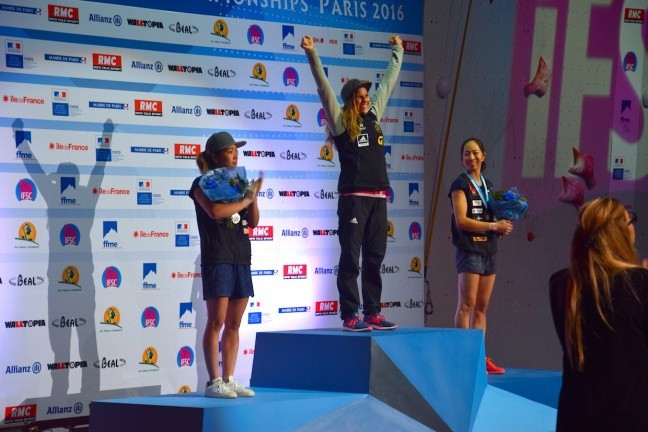 Thousands of fans gathered at the AccorHotels Arena in Paris today to watch all four disciplines of sport cimbing and the final day of the 2016 International Federation of Sport Climbing (IFSC) Climbing and Paraclimbing World Championships.

The women's bouldering final was the first gold medal contest of the day.

The crowd inside the arena erupted when Switzerland's Petra Klingler powered through the crux and took first place.

Emotional scenes followed as she embraced her coach with tears in her eyes.

Sport climbing is due to make its Olympic debut at Tokyo 2020 after being voted onto the programme along with baseball and softball, karate, skateboarding and surfing.

In the second final of the day, the men AL-2 finalists, impressed the partisan crowd.

Julien Gasc of France improved upon the silver medal he won last year and was also raucously backed by his home crowd as he went on to claim the gold.

In a thrilling final of the women's speed competition both Anouck Jaubert of France and Russia's Anna Tsyganova produced astounding efforts as they both posted times of under eight seconds.

Tsyganova, however, proved to be too good and claimed the world title with an explosive time of 7.52sec leaving Jaubet with the silver medal.

Tsyganova's compatriot, Iuliia Kaplina completed the podium with a victory in the bronze medal contest.

The men's lead event brought the competition to a close.

The reigning lead world champion, Adam Ondra of the Czech Republic, made quick work of the finals route.

In the overall standings Canada's Sean McColl, the 2014 IFSC World Championships, winner in the combined event, defended his top spot.

Joining him was Manuel Cornu of France in second and David Firnenburg of Germany in third place.

In the women's overall standings, 16-year-old Russian Elena Krasovskaia was officially given the gold medal which she secured yesterday.

Claire Buhrfeind of the United States picked up the silver and and Charlotte Durif of France completed the podium.