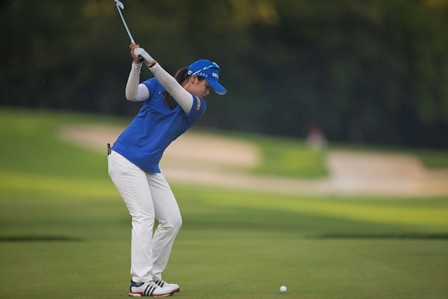 South Korea posted a second-round 137 to move into the lead at the Women's World Amateur Team Golf Championships at Riviera Maya in Mexico.

A 68 from Min Ji Park and a 69 from Hye Jin Choi were key as the Koreans overtook first round leaders Switzerland and gained a seven stroke advantage in the process.

After first claiming the Espirito Santo Trophy for winning the event in 1996, South Korea are now chasing a fourth victory at the tournament.

“I’m very happy that we are leading at the moment and I’m very proud of the players,” said Korean captain Sang-Won Ko.

“It was a little different from yesterday.

"We struggled in the front nine yesterday but today everyone seemed very calm.

"I feel that they really enjoyed playing and that’s why the score is very good.”

Sixteen-year-old Park, the Australian amateur champion, posted six birdies in her four-under-par round while Choi, the low amateur at the US Women's Open, struck four birdies during her round.

“This is a team event though, so we focus on playing as a team, practicing together and keeping a good team spirit.

“We trust each other very much and that is good for our performance.”

Switzerland's team went round in 145 to slip into second place.

Ireland, who were seventh after day one, moved up to third place as Leona Maguire went round in 70.

Maguire is one of two Rio 2016 Olympians in the field, with her country trailing the Koreans by 12 shots.