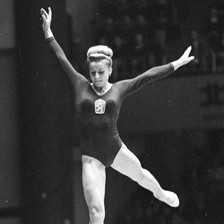 Legendary Czech gymnast Vera Caslavska, who won seven Olympic gold medals during her glittering career and became a leading name in the fight against her country’s Soviet rule, has died at the age of 74.

Caslavska, who clinched three titles at Tokyo 1964 and a further four golds at Mexico City 1968, passed away in her sleep yesterday following a battle with pancreatic cancer.

The Czech, a member of the International Olympic Committee (IOC) from 1995 to 2001, joined Soviet Larissa Latynina as the only female gymnast to have won back-to-back titles with her all-around successes at both Games.

Caslavska will also be remembered for an anti-Soviet protest during the Games in the Mexican capital, where she bowed her head and turned away when their national anthem was played.

Her performances in the artistic gymnastics competitions had seen her beat athletes from the Soviet regime she so publically opposed.

The event in Mexico City came just weeks after Soviet tanks had invaded Czechoslovakia in order to suppress attempts to reform Communist rule, with her gesture at the Olympics remaining one of the most poignant images of its kind.

She had also signed the “Two Thousand Words” manifesto - which opposed the Soviet-style communist regime drawn up by writer and journalist Ludvík Vaculík - earlier that year.

Those who had supported the document were denounced as criminals and she then fled to the mountains, where she was still able to complete her preparations for the Mexico City Games.

“I was hanging on trees and tumbling in the meadows,” she later recalled.

Following her protest at the event, Caslavska was deprived of the right to travel out of Czechoslovakia and was unable to take part in sporting events both at home and abroad, effectively forcing her into a premature retirement.

She continued to train and help other gymnasts in the country as well as in Mexico, where she worked as a coach.

Former IOC President Juan Antonio Samaranch then lobbied for her to be able to work in her home country following her persecution and exile.

Caslavska was made President Vaclav Havel’s sport and social issues adviser when the Communist regime in Czechoslovakia ceased in 1989, before she helped overhaul the Czech Olympic Committee for six years between 1990 and 1996.

"The life of Vera Caslavska, which was marked by great sporting triumphs as well as tragic family affairs, constitutes perhaps the first legend in the modern history of women’s artistic gymnastics.

"I had the occasion to meet her last year during a ceremony.

"She still showed a great desire to be useful to the development of our sport.

"Vera Caslavska was a great lady, a wonderful athlete who left her mark on her sport and her time, a being whom the Olympic sports world will never forget."