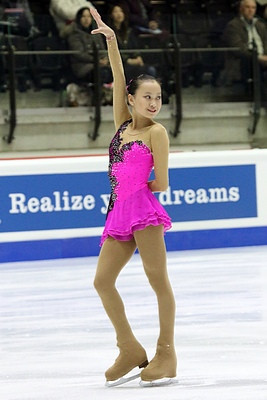 Singapore will have a representative at February's Four Continents Figure Skating Championship in Gangneung, South Korea, for the first time since 2012.

Yu Shuran will fly the flag at the Championships which are open to skaters from outside of Europe.

It will be the 15-year-old's first major senior international figure-skating competition, but the Beijing-based schoolgirl very nearly did not make it.

She had always trained at the same ice-skating rink in Beijing since she started competitive figure skating at eight-years-old, but the venue banned her from using it.

For the first six months of the year, she had to switch between up to three different ice rinks each week because Capital Stadium refused to allow her coach to conduct training sessions as it had re-branded itself as a public ice rink.

"Before the rink closed, I had a schedule that was set in stone," Yu said to the Strait Times.

"But when the rink closed, the hours were really late and irregular.

"The latest I would skate would be from 10.30pm until midnight.

"I would sleep very late, and for only five or six hours."

Feeling fatigued and tired, she became ill and had to withdraw from this year's National Championships.

Fortunately, just two months before the Asian Open, Shuran, her coach and her peers settled at a new rink, where they could train on ice more often and at more flexible hours.

She went on to place fifth out of 10 skaters at the Asian Open in Manila, her score of 111.75 earning her a spot in Gangneung.

Singapore was last represented at the Four Continents four years ago, when Brittany Lau placed 28th out of 30 competitors.

Shuran is hoping to improve on that result by finishing within the top 24 and advancing to the free skate.

She said: "I don't want to get ahead of myself - I'll go into it fully prepared and do my absolute best."