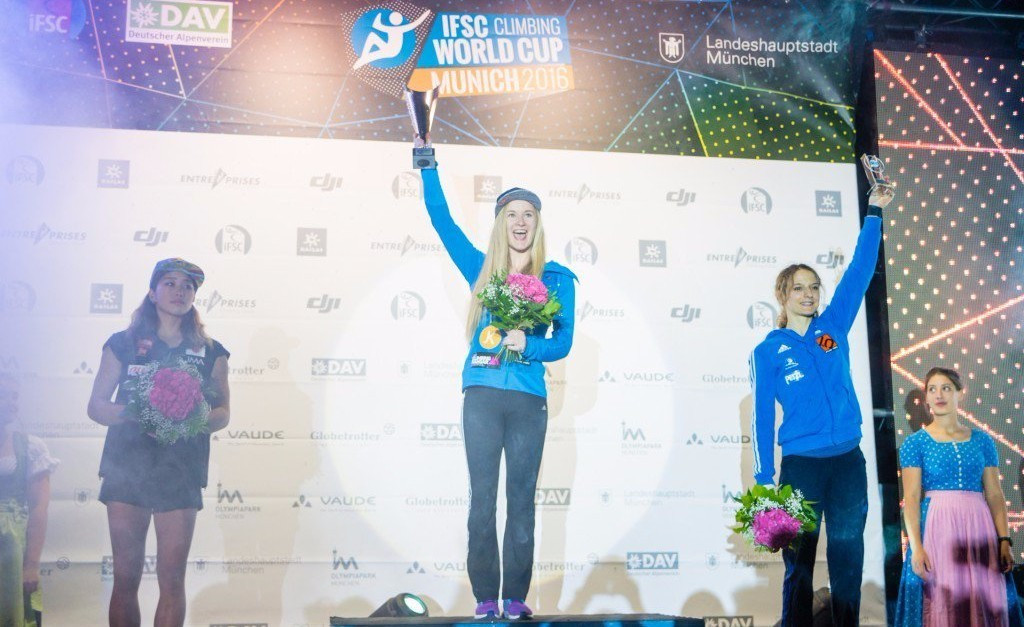 Tomoa Naraski and Miho Nonaka of Japan finished on top in Munich at the seventh and final International Federation of Sport Climbing (IFSC) Bouldering World Cup of 2016.

He needed to beat team-mate Kokoro Fujii to win overall, and the 20-year-old did just that when Fujii missed out on qualifying for the finals.

Alexey Rubtsov of Russia was forced to settle for third overall behind Fujii whilst 2015 champion Jongwon Chon of South Korea could not make a second overall podium.

For the women, Britain's Shauna Coxsey had already sealed the overall title.

She was second in Munich, with Nonaka maintaining second place overall with her victory in the German city, to improve on her third-place finish last year.

The first women's obstacle  did not factor into the equation when the feet of every athlete peeled off the bean-shaped volumes just before the top.

The second required both strength and precision, and four women solved the horizontal mantle.

Five climbers powered through the triangular volumes to the top, but Le Neve required one more attempt to do so than her competitors.

Heading into the last obstacle, Coxsey, Nonaka and Akiyo Noguchi were tied with two flashes apiece and three bonus holds.

Neither Coxsey nor Noguchi could solve the tricky slab start, and the former beat the veteran only with a count-back to the semis.

Despite having the gold in the bag via the countback, Nonaka still found the bonus hold beyond the technical traverse and kept it together to the top and the win outright.

The first obstacle for the men was powerful, but four athletes muscled up for flashes.

Chon and Narasaki separated themselves from the pack with tops on the technical M2.

Narasaki further distinguished himself by maintaining his balance on the M3 slab, the only athlete to do so all the way to the top.