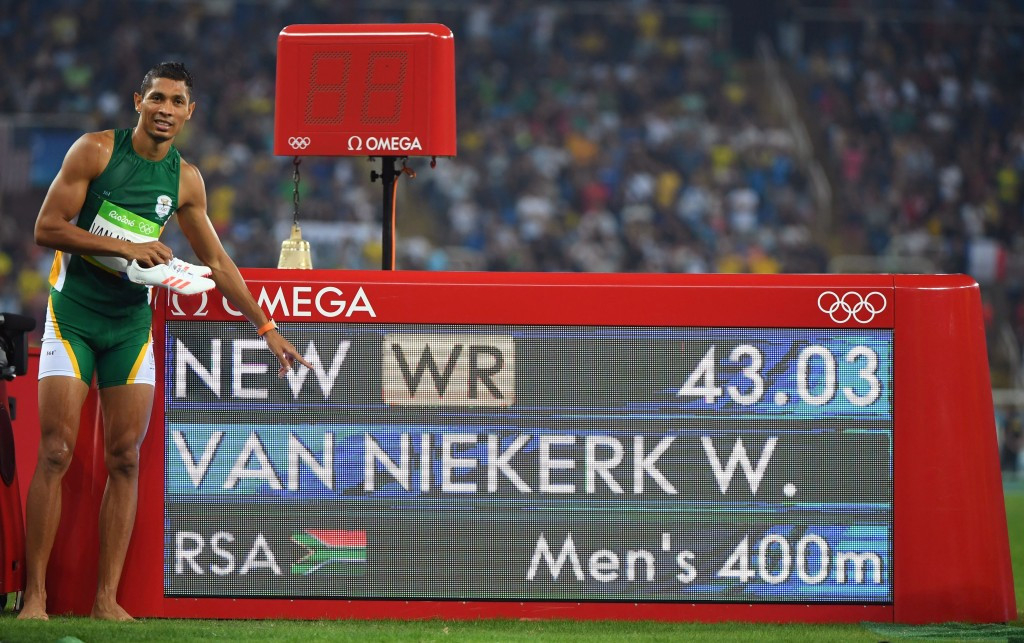 A stupendous night of athletics here produced the result that most people wanted to see as Usain Bolt beat Justin Gatlin to earn a third consecutive Olympic 100 metres title in 9.80sec, but even that huge feat was overshadowed by the performance of South Africa’s Wayde van Niekerk as he won 400m gold from lane eight in a world record of 43.03, breaking Michael Johnson’s 17-year-old mark.

In between those two performances there was another magnificent winning flourish from Colombia’s Caterine Ibarguen as she produced two 15 metre triple jumps – the best of them 15.17m - to win the Olympic gold medal she missed by one place at London 2012.

Track and field just does not get any better than this.

World record breakers in the 400m generally do so from the middle lanes, lanes they earn by running fast in the semi-finals.

While Grenada’s defending champion Kirani James and the former United States Olympic and world gold medallist LaShawn Merritt had done what was required in their first semi-final, finishing in 44.02 and 44.21 respectively, the 24-year-old from Cape Town only clocked 44.45 in his semi, finishing second behind Trinidad and Tobago’s Machel Cedenio.

Thus when the final played out there was a titanic struggle between James and Merritt in the plum lanes, five and six but as the stagger unwound in the final straight it became a struggle for silver - James won it, 43.76 to 43.85 - as Van Niekerk floated away from all those inside him.

He crossed the line with an expression that was close to consternation – as if he could not quite believe what he had done.

The last man to win an Olympic title from lane eight was Eric Liddell back in 1924 at the Paris Olympics, a Games immortalised in the Oscar-winning film Chariots of Fire.

Thus Johnson’s only main remaining world mark - Bolt eclipsed his 200m time eight years ago at Beijing 2008 - set at the International Association of Athletics Federations’ World Championships in Seville in 1999, was surpassed.

"Oh my God! From lane eight – a world record!” said Johnson as he watched from the BBC commentary box.

"Van Niekerk is so young, what else can he do?

"It is something I thought I could do, but never did.

"Usain Bolt will be retiring soon, this could be the next star of the sport.”

Van Niekerk’s training is regularly supervised by his 74-year-old great grandmother Ans Botha, but after the race he gave thanks to God.

On the subject of his race strategy he responded: "Well, my strategy...I don't know what my strategy was.

"I just went out there to do my best tonight."

He looked to his left and right over the closing stages of the race, explaining afterwards: "Yeah, I thought someone was going to catch me, because I felt very alone and I was like, 'What's going on, what's going on?'

Bolt’s victory over Gatlin closely resembled his triumph at last year’s IAAF World Championships in Beijing, given that he arrived here having had his preparations undermined by injury but rose to the competitive challenge of defeating an opponent who had run faster than him during the season.

This time, however, the problem was not acute as in 2015 - having set his best time of the year, 9.88, at the Jamaican Olympic Trials opening round, Bolt withdrew with a hamstring problem but was able to return last month at the IAAF Diamond League meeting in London, where he won over 200m in 19.89.

So he was in shape - but not top shape.

Asked how he felt after coming through his opening round here, he replied: “My right leg is good.”

As things turned out, Bolt only needed to be in good rather than great form to win. Gatlin, who had won his Beijing semi-final in 9.77, only managed 9.95 here.

But the performance by the 29-year-old Jamaican in what will be his final Olympics was indeed great – and a promising precursor to his ambition of winning a third Olympics gold in his favourite event, the 200m, before helping Jamaica to another sprint relay gold.

Gatlin, who has served two doping bans, had been booed like a pantomime villain when he was introduced to the crowd – and there was no doubt who was the hero.

The American took silver in 9.89 ahead of Canada’s Andre de Grasse,who claimed bronze in 9.91.

"There will always be doubters, but I'm in better shape than last season.

"Somebody said I can become immortal.

“Two more medals to go and I can sign off.

"The race was brilliant - I didn't go so fast but I'm so happy I won.

On the subject of the crowd’s reaction to his perennial rival he added: "That's the first time I've gone into a stadium and they've started to boo him - it surprised me."

Ibarguen produced her first 15m triple jump in round two after her bête noire, Kazakhstan's Olga Rypakova – who beat her to gold at London 2012 and also ended the run of 34 victories she put together after those Olympics when she won in Birmingham two months ago – had taken an early lead with a season’s best of 14.73m.

The 32-year-old Colombian reached 15.03 and was never headed, although Venezuela’s 20-year-old world indoor champion Yulimar Rojas edged closer to her with efforts of 14.87m and 14.98m before the double world champion put matters beyond doubt with her fifth round 15.17m.

“It’s the biggest dream to achieve this,” said Ibarguen at the end of a dream night of athletics.

Following all that will not be easy, but two events at the end of tomorrow's evening session - the women's 400m and men's 800m final - promise to keep the interest levels high.

Allyson Felix, the London 2012 200m champion, had planned a 200/400 double here - indeed the schedule was altered to enable the attempt - but a failure to earn third place in the 200m at the punitive US Olympic trials meant she had to concentrate her attention on the event at which she is world champion. She certainly looked very good in heading home her main expected rival, Shaunae Miller of the Bahamas, in the semi-final, clocking 49.67sec.

David Rudisha, who produced one of the all-time great Olympic performances at London 2012 in winning the 800m in a front-running world record of 1:40.91, may not be in that shape now, but he is still looking ominously good and able to deal with the challenges of France's Pierre Ambroise-Bosse and Algeria's Olympic 1500m champion Taoufik Makhloufi.

Poland's Anita Wlodarczyk is hoping to improve upon her world record in the women's hammer, and the women's 3000m steeplechase will feature the rivalry of Kenya's Hyvin Jepkemoi and naturalised Kenyan Ruth Jebet, now running for Bahrain.