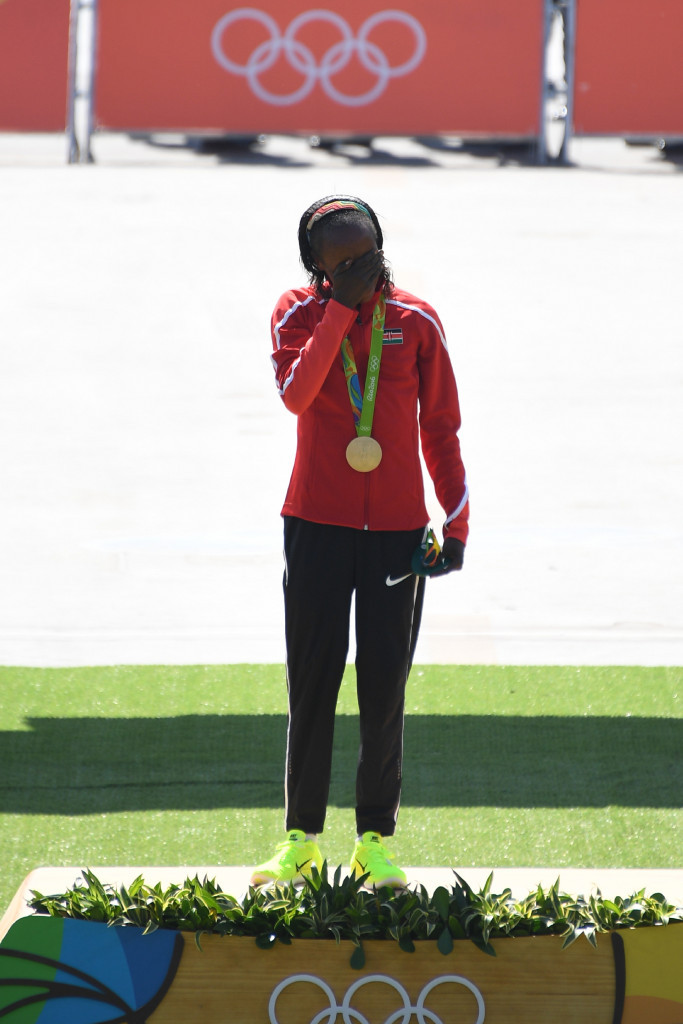 Jemima Sumgong delivered Kenya its first Olympic women’s Marathon title in scorching conditions as she clocked 2hr 24min 04sec at the Sambodromo, home to the world-famous Carnival parade - and according to her the result was never in doubt.

This year’s London Marathon winner had broken clear of the pack with six kilometres remaining in company with Eunice Kirwa, a naturalised Kenyan now running for Bahrain, and Ethiopia’s world champion Mare Dibaba.

Dibaba was the first to drop away, two kilometres from the start/finish line, and although Sumgong was unable to shake Kirwa off she remained ten metres or so ahead until they reached the line, with Kirwa taking silver in 2:24.13 and Dibaba, despite suffering from stomach ache, hanging on for bronze in 2:24.30.

"I was never worried that I'd lose this,” said the 31-year-old, who showed just what she was made of in London where she hit her head on concrete after a collision with a competitor but carried on with blood streaming down her forehead, later evading a spectator who jumped a railing and attempted to stop her.

“At 35km I noticed that my other two teammates had dropped off and that gave me the motivation to carry on.

“At 40km I saw there were three of us but I knew whatever happened I couldn't lose the gold and then I knew I was on the way to history.

"I was at last year’s World Championships in Beijing but I was pretty disappointed that I wasn't able to win a medal or make it on the podium, but I knew one time, one day, I'd be somewhere.”

The emotional force of her achievement was evident as she broke down in tears on the podium.

Kirwa, 32, who won the Asian Games in 2014, commented: "I'm very happy because this was my first event in the Olympics and I earned a silver medal.

It was the second medal for Bahrain in Olympic history, after the silver earned by Maryam Yusuf Jamal in the women's 1500m at London 2012.

The course, which began and ended at the Sambodromo, took runners through Rio’s historic centre, down to Flamengo Park and Botafogo beach and then back to the city centre and port area.

Until the final break by the eventual medallists, the race was led by a group of seven also involving Tirfi Tsegaye of Ethiopia, who was fourth in 2:24.47, Volha Mazuronak of Belarus, Shalane Flanagan of the United States and Rose Chelimo of Bahrain, who finished eighth as US runner Desiree Linden finished strongly to earn seventh place in 2:26.08.

There were several stirring sights at the finish line as the runners streamed in.

North Korea's Kum-Ok Kim, coming home 49th in 2:38.44, simply dropped to her knees as she moved one step beyond the line and remained there a couple of seconds before recovering herself and tottering away towards the nearest shade.

German sisters Anna and Lisa Hahner crossed the line all smiles, clasping hands, with Anna – the eldest by 16 minutes - also getting the nod here by a second as she clocked 2:45.32 for 81st place.

Two of Estonia's triplet entry - Lily and Leila Luik - awaited the arrival of their third sibling Liina, whom they promptly enfolded in the national flag and embraced before doing a kind of slow-motion can-can dance with flag still around their shoulders.

For those keen and serious athletics followers out there Lily had been the first sister home, taking 97th place in 2:48.29, with Leila 114th in 2:54.38 while Liina officially failed to finish.

The long and blinding road also came to an end for Cambodia's Ly Nary, the last runner on the course, who arrived with a back-up of eight motorcycles as if she were a Minister of State.

Smiling broadly behind her sunglasses and waving cheerily, she accepted a Cambodian flag in the final sun-drenched 20m and draped it over her shoulders before finishing 133rd and last in 3:20.20.

It has indeed been a long and winding road to Rio for this 44-year-old who ran under three hours for the first time at the 2015 Valencia Marathon.

At the age of nine she left Cambodia to escape the violence of the Khmer Rouge.

She was fostered by a French family, through the Red Cross, and returned to Cambodia at age 26 to help the country's rebuilding process, while pursing her doctoral studies.

“I think I’m done with the hot weather marathons," she said.