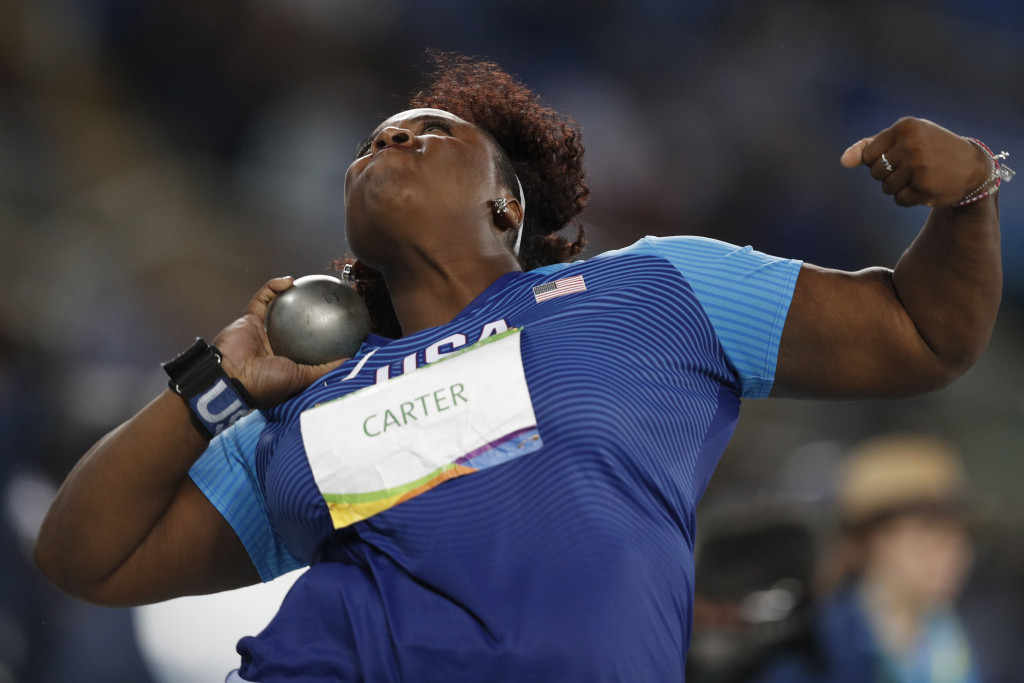 Until that last throw of 20.63 metres from Carter - who thus became the first United States athlete to win this event – Adams appeared to have done enough to create her own bit of statistical history as the first woman to win a hat-trick of Olympic titles in an individual athletics event.

As it thudded into the turf Adams looked, frankly, sick – but she still sportingly congratulated her opponent after her own final effort of 20.39m, three centimetres shy of that with which she took what appeared to be a decisive lead in the second round.

The 30-year-old Carter, who had a breakthrough performance in winning the International Association of Athletics Federations’ World Indoor title in Portland five months ago, thus bettered the performance of her father, Michael Carter, who won shot put silver at the 1984 Los Angeles Games.

"I told him, he beat me with the amount of records he had for college, I beat him for high school and now I can say I beat him professionally because I have a gold and he has a silver,” said Carter.

"I have been very consistent in my last few meets so I knew I could have an NR (national record) at any moment and I was happy it happened here.

"I've been to three Olympics so I hope I learned something along the way.

"I knew I had more in the tank so to go out there and pull the pieces together, I'm just really happy."

"The competition's not over until the last person throws.- everybody wants to win the gold.

"I have been competing against Valerie since we were in 10th grade so just to see her career and everything she has done is amazing because she is an awesome person and I absolutely love her.

"I think we all bring out the best in each other.”

It almost did the trick.

“When I've come so far from last year, I'm going to take it,” said Adams.

“I've struggled last year and through this year - it was pretty tight until the last round."

Bronze went to Hungary’s Anita Marton, who threw a national record of 19.87m in the final round to confirm a position she had held by dint of a better second throw after she and China’s Lijiao Gong had both reached 19.39m.

World and European champion Christina Schwanitz of Germany had a woeful sequence including four fouls and a best of 19.03m, finishing sixth.

There was drama in another field event as Britain’s defending long jump champion Greg Rutherford fouled the first two of his three qualifying efforts and - facing an unthinkable early exit - produced a rather shaky final jump of 7.90m, 30 centimetres down on the automatic qualifying mark, which ultimately got him into tomorrow’s final.

China’s world bronze medallist Wang Jianan topped the qualifiers with 8.24m, and Jeff Henderson of the US was the only other automatic qualifier with 8.20m.

Will Rutherford, the Olympic, world, European and Commonwealth champion, be able to demonstrate once again his championship-winning qualities?

The Rio 2016 schedule has thrown up the possibility of London 2012’s "Super Saturday" replaying itself, as it features the men’s long jump, the second day of the heptathlon - which Britain’s defending champion Jessica Ennis-Hill leads at the halfway point - and the men’s 10,000m, where Mo Farah will attempt to defend the first part of the 5,000m/10,000m double he won four years ago.

Ennis-Hill ended the day on 4,057 points  with Belgium's Nafi Thiam second on 3,985 ahead of Akela Jones of Barbados on 3,964 and another Brition, Katerina Johnson-Thompson, who is fourth with 3,957.

Shelly-Ann Fraser-Pryce will attempt tomorrow what Adams narrowly failed to do in securing a third Olympic title - and the Jamaican, whose season has been slowed by injury, posted the fastest first round qualifying time of 10.96sec.

James Nyang Chiengjik was never a contender in heat four of the 400m, finishing eighth and last in 52.89 in a race won by Trinidad and Tobago's Lalonde Gordon in 45.24,

But he took part, and with honour, as one of the 10 athletes selected for the Refugees Olympic Team which marched into last Friday's Opening Ceremony under a flag with five interconnected rings on it.