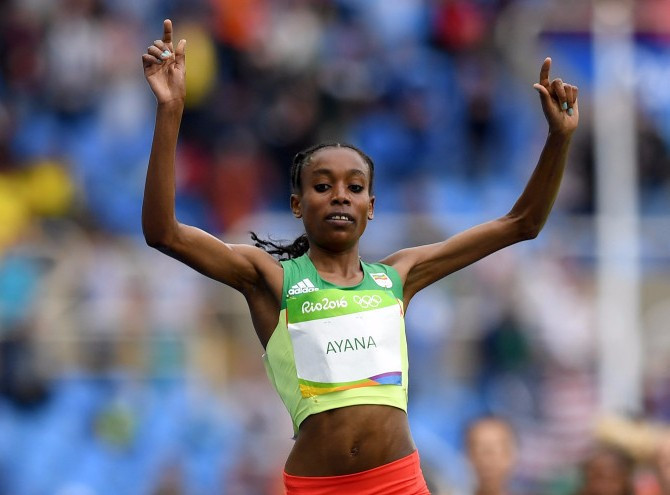 Almaz Ayana provided the opening session of the Rio 2016 athletics programme here with a historic flourish as she took more than 14 seconds off the world 10,000 metres record which has stood, apparently invulnerable, since 1993, claiming the first track and field gold of the Olympics in a time of 29min 17.45sec.

She finished ahead of 18 others who achieved either national records or personal bests on the new, superfast blue Mondo track.

Since Wang Junxia set that record of 29:31.78 in Beijing there has been widespread suspicion about its legality, given that it occurred during a time when China’s women reared suddenly and mysteriously to the top of women’s middle and long distance running, before dropping away again as suddenly.

Runners such as Britain’s Paula Radcliffe, who won the European 2002 title in 30:01.09 and thus now stands ninth on the all-time list, indicated clearly that she had grave suspicions about the mark she had tried in vain to better.

The post-event press conference threw up its inevitable question and the response was startling.

"I am crystal clear - my doping is Jesus,” Ayana replied, admittedly, through an interpreter.

It has been at 5,000m that Ayana has made her name, frustrating compatriot Genzebe Dibaba’s attempted 1500m/5,000m double at last year’s International Association of Athletics Federations (IAAF) World Championships and, in June, winning the IAAF Rome Diamond League meeting in 14:12.59, the second fastest time ever behind Tirunesh Dibaba’s 2008 effort of 14:11.15.

What might she do when she becomes familiar with the distance, you wondered?

The Kenyans had a plan from the start, as their 22-year-old Alice Aprot Nawowuna went to the front and dragged a group of eight with her, including her 32-year-old compatriot Vivian Cheruiyot, the four-times world champion, and Tirunesh Dibaba, winner of the last two Olympic titles and relatively lately returned to the track following a sojourn in marathon running and becoming a mother.

But Ayana also had a plan.

And when she struck for the front with 10 laps to go the race was won and lost in a few brutal moments.

Only Cheruyiot gave chase, restricting the gap with huge determination right to the end, and being rewarded with silver in a national record of 29:32.53 ahead of Dibaba, who ran a personal best of 29:42.56.

In terms of the heights and depths of performance, this was the finest women’s 10,000m race of all time.

It has provided four of the five fastest times ever recorded, with Cheruiyot on the all-time list less than a second behind Wang, and Dibaba and Aprot Nawowuna fourth and fifth.

Ayana will now turn her attention to an Olympic double – and she made it clear at her post-event press conference that she did not feel she would pay for this effort in her second field of endeavour.

“I don’t think running this race will make any special difference to me in the 5,000,” she said.

"This means everything for me.

"Getting to this point is a dream come true. I never thought that this would happen and I'm so in awe.

The first two disciplines in the heptathlon also provided some notable activity which, while it might not have been at the level of Ayana’s win, nevertheless kept a stadium that was only about two-thirds full with a compelling drama.

That clearance left this 30-year-old mother-of-one jumping up and down on the landing mat with a thrilled smile on her face, for all the world like a kid on a bouncy castle.

But all that only secured Ennis-Hill third place overall after the first two events as fellow Briton Katerina Johnson-Thompson and Belgium’s Nafi Thiam went on to clear 1.98m, a world record within heptathlon competition to claim the top two places.

Elsewhere, there was disappointment for Germany’s defending discus champion Robert Harting – he of the shirt ripping and random hurdling – as he failed to qualify for the final, although his recent form, having returned from the ankle injury that caused him to miss last year’s World Championships, had made it clear that he would struggle as a medal contender.