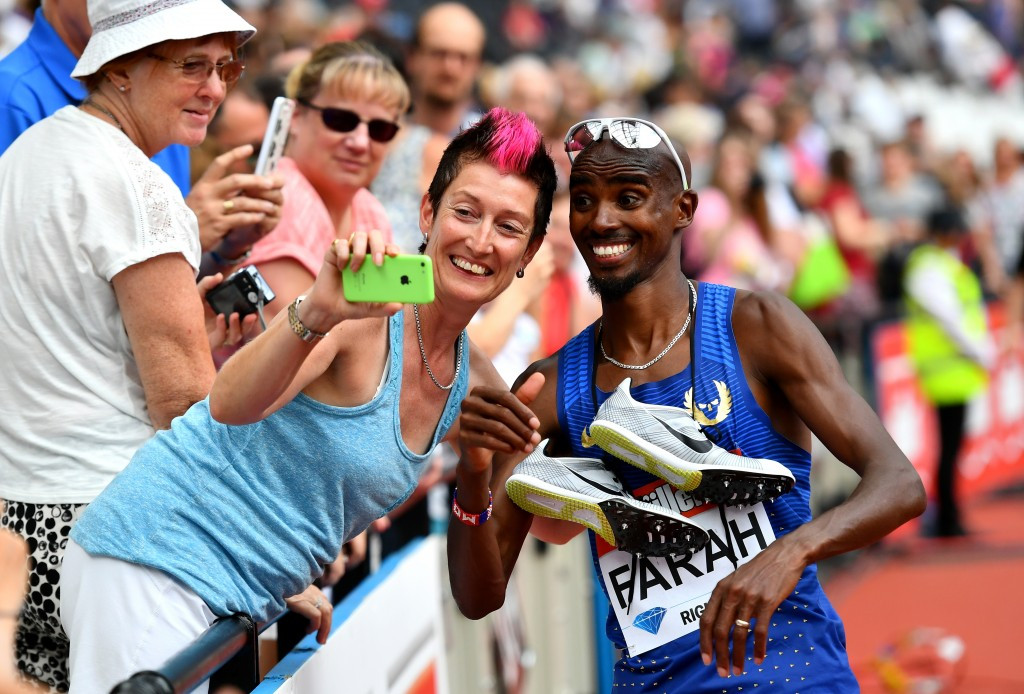 Mo Farah produced the expected winning home flourish at the end of the two-day International Association of Athletics Federations (IAAF) Diamond League meeting in London, earning victory the hard way in a 5,000 metres where he pushed the pace from the off before crossing the line a finishing straight clear of a top class field in 12min 59.29sec, the fastest run so far this year.

As a final race marker for the impending Rio Olympics, where the 33-year-old Briton plans to defend his 5000 and 10,000m titles, it was persuasively impressive.

Running in the stadium where he earned double gold four years ago - but on a new, super-fast Mondo track which matches the one that will be used in Rio in all but its blue colour - Farah had taken charge of the race by the 4000m mark and produced his two fastest laps at the close, 1min 01.77sec and 56.95sec, to nip under the 13 minute mark, to the manifest delight of a crowd which filled the larger part of a stadium now decked in the livery of long-term tenants West Ham United.

“I got amazing support from the crowd, and I just wanted to go for it,” said Farah.

“It was my last chance to run quick before Rio.

“I mean, I love this track, it means a lot to me - not many people get a chance to compete in their home town and have so many memories of the place.

“I am in good shape but I have to keep my feet on the ground - anything can happen in two and a half weeks, it is all about staying patient now.”

Second place in 13:14.85 went to a fellow Briton who has been training with Farah at altitude in Font Romeu, Andrew Butchart.

“I have never experienced a crowd like this in my life,” said the 24-year-old Scot who sealed his Rio place by winning the British title last month.

“I want to make the final in Rio, I think the race could be something similar to that.

“I have been to Font Romeu with Mo and the guy trains like an animal.

“Some of the guys racing tonight are very talented so I’m delighted to beat them.”

Those guys included the 41-year-old who won the US trials earlier this month, Bernard Lagat, who was out-kicked by Butchart in finishing third in 13:14.96 and Kenya’s Isiah Kiplangat Koech, fourth in 13:55.44.

Dafne Schippers, who will seek a 100/200m double in Rio, offered powerful evidence that she is in ideal shape as she won the longer distance - at which she won the world title last summer - in 22.13, exactly half a second clear of her nearest challenger, Tiffany Townsend of the United States.

“I’m happy for now,” said the former heptathlete from The Netherlands, who retained her European 100m title on the home soil of Amsterdam earlier this month.

“I came here to win the race and I feel like the time will come in Rio.

“I’m comfortable with being tagged the favourite, I’m never nervous, which is good for me.

Her chances in the 100m will have been assisted by the difficult season experienced by the Jamaican Olympic champion who beat her to the world title over the shorter sprint last summer, Shelly-Ann Fraser-Pryce.

While Usain Bolt will come away from this meeting with a sense of reassurance after winning Friday night’s 200min 19.89sec, Fraser-Pryce - whose preparations this season have also been undermined by injury - will leave with doubts in her mind.

She experienced a reality check in a 100m final where she could only manage third place in 11.06, 0.03sec slower than her winning semi-final time.

Victory went to Marie-Josee TaLou of the Ivory Coast, who equalled the personal best of 10.96 she had set in winning the second semi-final.

Second place went to Trinidad and Tobago’s Michelle-Lee Ahye in 10.99.

“Now I’ll focus on the journey ahead and continue to work hard.

“Sometimes you never know what will happen, sometimes things don’t go according to plan.

“But it is what it is - injuries have just been a part of the journey so far and success is all about picking yourself up.

“I already know how tough the Olympics will be - mentally I’m prepared for it, but whatever happens there I’m glad to have made it.”

The British men's 4x100m relay team - perhaps fortified by the dismissive comment from Usain Bolt the previous day regarding their chances of winning in Rio ("pretty slim") - produced the fastest time yet run this year as they won in 37.78.

Greece’s recently installed European pole vault champion Katerina Stefanidi maintained her consistently high standards this season as she beat a field which included world champion Yarisley Silva thanks to a clearance of 4.80.

The Cuban was second with 4.72 in a competition which sent out alarm signals for the hosts of the impending Rio Olympics as Fabiana Murer, the 2011 world champion who is one of Brazil’s big medal hopes next month, retired from the competition without setting a mark.

Stefanidi has now effectively secured the Diamond Race trophy in her event - she need only compete in the final to seal the deal.

The same goes for Croatia’s Sandra Perkovic, who registered another discus victory with a best effort of 69.94m.

There was plenty for home fans too cheer in the women’s 800m, where victory went to Britain’s Shelayna Oskan-Clarke in 1:59.46 ahead of former European champion Lynsey Sharp, who clocked 1:59.54.

A mighty fifth round effort of 22.04 from shot put world champion Joe Kovacs earned him victory over New Zealand’s Thomas Walsh who recorded 21.54 and Germany’s former world champion David Storl, who was third with a best of 21.39.

Kerron Clement of the United States took the men’s 400m hurdles in 48.40 ahead of Javier Culson of Puerto Rico who clocked 48.63, while the long jump title went to China’s Xinglong Gao with a best of 8.11.