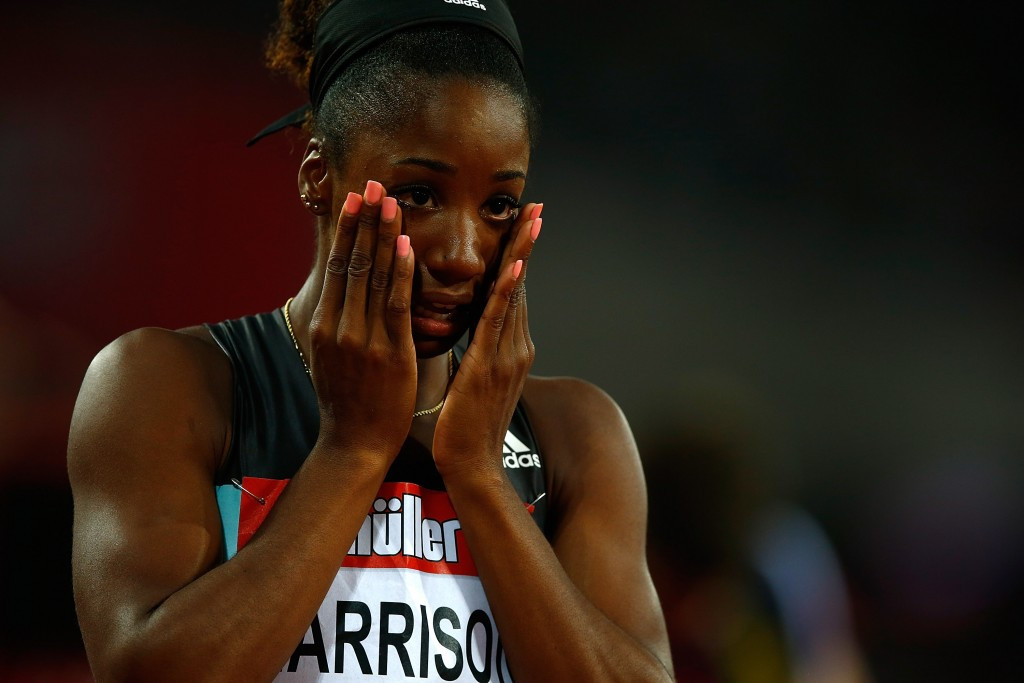 Usain Bolt put his recent hamstring problems behind him as he recorded 19.89sec to win over 200 metres in his last race before Rio 2016 at the International Association of Athletics Federations’ Diamond League meeting in London – but even Bolt had to give best on the night to the performance of US 100m hurdler Kendra Harrison, who lowered one of the longest standing world records, the 1988 mark of 12.21 set by Bulgaria’s Yordanka Donkova, with a time of 12.20.

Harrison, who moved to second on the all-time list with the 12.24 she recorded at the Eugene Diamond League meeting in May, failed to earn one of the three qualifying places at this month’s US trials, finishing sixth.

But a virtually faultless performance from gun to tape indicated her determination to make a point on the recently laid super-fast Mondo track that is identical in all but colour to the blue version that will be used in next month’s Rio Olympics.

It was an astonishing effort by an astonished athlete – after she had crossed the line five metres clear of a world class field which included Britain’s Olympic heptathlon champion Jessica Ennis-Hill the time which flashed up initially was only 12.57, but very soon it became clear that this was the time registered by second-placed US hurdler Brianna Rollins, the 2013 world champion, and the winning time was amended to 12.20.

Harrison’s face was a picture of shock and joy, but mostly shock, as she began to register the magnitude of her achievement before sinking to her knees on the track where she had won her earlier semi-final in 12.40.

“Not making the Olympic team I was really just determined to come out here and show what I really could have done in Rio,” she said.

Only a little further down the roll of honour on the first of the two days of the Muller Anniversary Games came Britain’s Laura Muir, whose totally committed victory in the 1500m left a field including the Netherlands’s world bronze medallist Sifan Hassan in her wake and earned her a national record of 3min 57.49sec, surpassing the time of 3:57.90 set by Kelly Holmes in winning the second of her two gold medals at the 2004 Athens Olympics.

“I knew I was in very good shape and I wanted to come out here and do it justice,” said Muir, a 23-year-old veterinary student at Glasgow University who, unlike Harrison, is Rio-bound.

“I thought I was in four-minute shape, but to get the record here in the London 2012 Olympic stadium is unbelievable.”

Holmes swiftly tweeted: “Amazing run – knew you could do it, you’ve been running so well this year.

"Records are there to be broken.”

That was the second British record of the night following the 41.81sec clocked by the victorious home women's 4x100m quartet of Asha Philip, Desiree Henry, Dina Asher-Smith and Darryl Neita, the fastest time of the year so far.

Bolt, who has been receiving intensive treatment from German doctor Hans Muller-Wohlfahrt since pulling out of the Jamaican Olympic trials three weeks ago, retained his concentration as the field only got away at the third attempt and had established a clear if not decisive lead over the field as the stagger unwound in the final straight.

In what was his first 2016 outing over his favourite distance, the world 100 and 200m record holder was clearly working all the way to the line before crossing clear of Alonso Edward of Panama, who clocked a season’s best of 20.04 and Britain’s 2014 European champion Adam Gemili, who has returned to action after a serious hamstring injury and who also had a season’s best, 20.07.

Bolt appeared satisfied rather than elated after a victory that has established him fifth in the 2016 world lists behind the 19.74sec run by former world and Olympic 400m champion LaShawn Merritt at the US Olympic trials, and the 19.75 also run at the US trials by world silver medallist Justin Gatlin.

“I’m getting there,” said Bolt.

“I'm not fully in shape, I need more work.

“But over time I'll be fine, I'll just keep doing the work.

“I tried to go for the kerb but I don't think I executed well.

“The key thing is I came out here and won but I'm always hungry for more.

“It is always great to come back here to London and compete, it is a lot of fun.”

Olympic and world triple jump champion Christian Taylor of the United States indicated his readiness for a Rio defence as he won in 17.78, the best recorded so far this season.

In the stadium where she won the Olympic heptathlon title four years ago, Jessica Ennis-Hill was encouraged to reach the high-powered final of the women’s 100m hurdles despite finishing eighth and last in 13.04.

Earlier in the evening Britain’s Katerina Johnson Thompson, who will also compete in the Rio heptathlon at the Rio Olympics, set an outdoor personal best of 1.95m in the women’s high jump in Rio, with Morgan Lake, who will be Britain’s sole selection at this event in the Olympics, also jumping a personal best of 1.92 in a competition won by Spain’s triple European champion Ruth Beitia with 1.98.

France’s world pole vault record holder Renaud Lavillenie, who will defend his title in Rio, put his embarrassing miscalculation at this month’s European Championships – where his defence failed after he elected to delay competing until the 5.75m mark and then failed to set a mark in windy conditions – as he earned a timely morale booster with a faultless progression to 5.90m before three failures at 5.97.

Victory in the men’s 100m went to France’s Jimmy Vicaut, who equalled his European record of 9.86sec earlier this season.

However, the superfast track didn’t do much for Vicaut or the rest of the field as he won in a relatively modest 10.02.