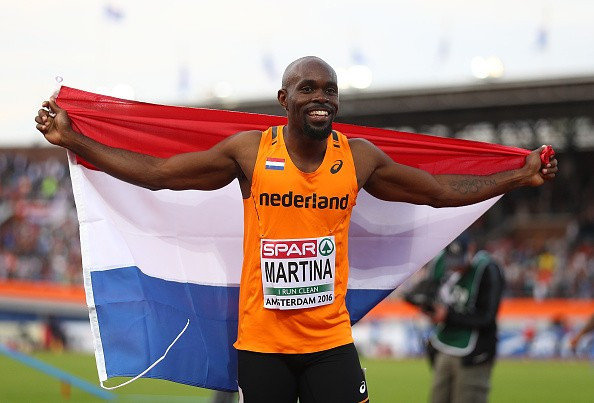 An unexpected last lunge of a 100 metres victory for home sprinter Churandy Martina provided the first full night of finals at the 23rd European Athletics Championships with a startling climax after a sequence of performances which had seen Belgium’s cancer survivor Thomas van der Plaetsen produce a heroic decathlon win here.

Britain and Germany also won double gold while there was a historic third high jump win for Spain’s Ruth Beitia.

Van der Plaetsen was diagnosed with testicular cancer in November 2014 but after treatment was back in competition by last summer, finishing 14th at the International Association of Athletics Federations World Championships.

Here, the 25-year-old claimed his first major international title after a stand-out performance in the eighth of the 10 events, where he produced his best Championship pole vault of 5.40 metres to move up from bronze to gold medal position with a total of 6,838 points, 46 clear of overnight leader Oleksiy Kasyanov of Ukraine.

A decent rather than spectacular javelin throw of 57.23m increased the Belgian’s lead by 11 points going into the 1500m, where he finished one place ahead of eventual silver medallist Adam Helcelet of the Czech Republic to win with a total of 8,218 points and by a margin of 161.

Beitia, 37, became the first athlete to win three high jump golds at the European Championships 15 years after she had won her first major title, at the European Under-23 championships, in the same Olympic Stadium built for the 1928 Games.

She looked transported with quiet joy at the way in which her career had come full circle in this historic sporting environment after securing a third successive European gold by becoming the only jumper to clear 1.98m, with Bulgaria’s Mirela Demireva claiming silver and Lithuania’s Airine Palsyte  bronze after 1.96m clearances.

“This is my third European title and the fact that it’s in Amsterdam makes it double special.

“This could actually be the perfect way to end my career but I still have one last dream I hope to achieve, which is winning a medal at the Olympics in Rio.”

An explosion of noise and an eruption of orange greeted the confirmation on the big screen that Martina had prevailed in a 100m that looked, until the final stride, as if it would be won either by Turkey’s Jak Ali Harvey or Jimmy Vicaut of France, who equalled the European record of 9.86ec this season.

Churundy claimed gold ahead of Harvey by thousands of a second as both clocked 10.07, with Vicaut taking bronze in 10.08 in a final that had seen one false start – with the guilty Richard Kilty of Britain having to walk away.

Britain’s golds came from Dina Asher-Smith in the women’s 200m and Greg Rutherford in the men’s long jump, while Germany provided winners in the women’s shot put and women’s 100m hurdles through Christina Schwanitz and Cindy Roleder.

The 20-year-old Asher-Smith, who last season became the first British woman to better 11 seconds for 100m, won her first senior international title in 22.37 after dominating her race from gun to tape, with Bulgaria's 2012 champion Ivet Lalova-Collio taking silver in 22.52 and Gina Luckenkemper of Germany claiming bronze in 22.74.

Defending men’s long jump champion Rutherford, who also holds the Olympic, world and Commonwealth titles, was able to complete a British double on the night after producing his winning effort of 8.25m in the fifth round, just as it looked as if the 8.21m achieved in the first round by Sweden’s Michel Torneus , with a following wind of 2.1 metres per second, would be enough to prevail.

Schwanitz, the defending women’s shot put champion, provided an emphatic statement of intent with her first effort of 20.17m, the best in Europe this season and second in the 2016 world lists behind the 20.43m achieved by China’s Lijiao Gong, the Olympic silver medallist at London 2012.

Her dominance was underlined by three more scoring throws, all at least half a metre longer than the best efforts of her opposition as Hungary’s Anita Marton claimed silver with 18.72m and the bronze medal went to Turkey’s 20-year-old former World Youth champion Emel Dereli with 18.22m.

Roleder produced the best women’s 100m hurdles time in Europe this season, 12.62, in finishing clear of Alina Talay of Belarus, 12.68, and Britain’s defending champion Tiffany Porter, who took the bronze medal in 12.76.

Germany might have expected a hat-trick of titles on the night given the outstanding recent form of their javelin thrower Thomas Rohler, who last week broke 90  metres for the first time of his career, throwing 91.28m, the 11th best of all time, in Turku.

But Rohler could do no better than fifth with an effort of 80.78m as Latvia’s Zigismunds Sirmais claimed a surprise victory with a personal best of 86.66m.