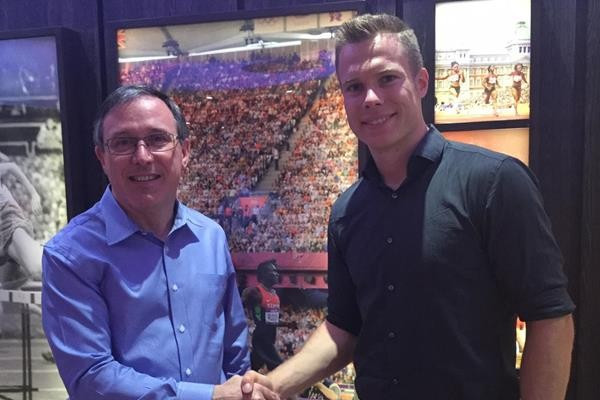 Germany’s Rehm made the decision after the meeting, during which he agreed to join the IAAF Working Group, chaired by Gracia, which is studying the use of prostheses at international competitions and whether it gives him an unfair advantage.

The 27-year-old will be a key member of the Working Group and was offered a glimmer of hope concerning possible participation at the 2017 World Athletics Championships at the Olympic Stadium in London.

The German and the IAAF “will work together on a rule change proposal to allow athletes using prostheses to compete in a future IAAF World Championships”, according to world athletics’ governing body.

The alteration to the regulation has not been confirmed but if it is agreed, Rehm will be able to represent Germany at future editions of the IAAF’s flagship biennial competition.

Currently the rule prohibits “the use of any mechanical aid, unless the athlete can establish on the balance of probabilities that the use of an aid would not provide him with an overall competitive advantage over an athlete not using such aid”.

A further meeting of the IAAF Working Group is scheduled to be held after the conclusion of the Rio 2016 Paralympic Games, where Rehm is the favourite for gold in the F44 classification.

The development marks the end to an ongoing saga as Rehm had been dealt a blow last week after failing to prove his prosthetic leg does not give him an unfair advantage.

Rehm, however, still harboured slim hopes of becoming only the second athlete to participate at the Olympics using a prosthetic blade.

The German, who jumped further than London 2012 gold medallist Greg Rutherford on his way to the International Paralympic Committee (IPC) Athletics World Championships title with a world record effort of 8.40 metres in Doha last year, has now confirmed to the IAAF that “he will not be seeking selection for the Rio 2016 Olympic Games”.

“He has to prove that the prosthetic he uses does not give him a competitive advantage and at this stage he has not been able to do that,” Coe said following a Council meeting.

He had faced continuous opposition during his ailing bid to compete at the Olympics, including from the German Olympic Sports Confederation, who confirmed to insidethegames in December that they wouldn’t pick him even if he achieved the qualifying standard.