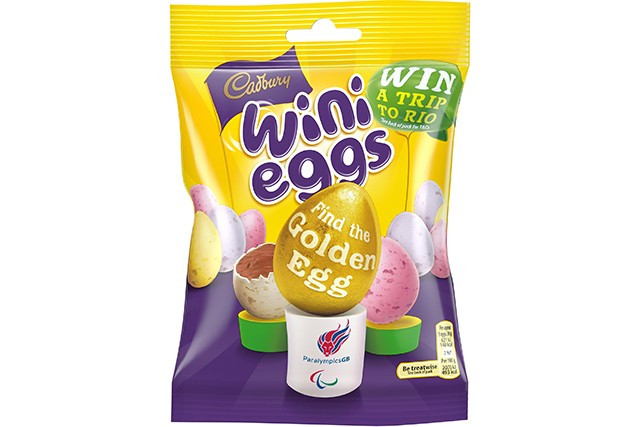 Chocolate giants Cadbury’s will release a special edition of their famous Mini Eggs product in July in a bid to raise funds for the British Paralympic Association’s (BPA) “Supercharge ParalympicsGB” campaign ahead of Rio 2016.

A proportion of the sale of each bag of Cadbury’s “Wini Eggs”, produced by Modelez International, who are a partner of the BPA, will go towards supporting British athletes at this year’s Paralympic Games.

Those who purchase the product will also have the chance to win a trip to Rio 2016 to get behind the British team.

The move represents the first time Mini Eggs have been sold outside of their traditional Easter window.

“This is an exciting announcement for us, the first time that we can provide the Great British public with a chance to make a difference to the team’s preparations through buying a much-loved product to support ParalympicsGB ahead of Rio 2016,” BPA chief executive Tim Hollingsworth said.

“The limited edition Cadbury Wini Eggs look fantastic and I’m looking forward to seeing them on the shelves in just a few weeks’ time.

“Thank you to Mondelez International for their support and indeed all our partners at this critical time for the BPA and the Paralympic Movement.”

The “Supercharge Paralympics GB” is the first scheme of its kind to be launched by the BPA and allows the British public to donate directly to the organisation and to take part in dedicated “Supercharge” fan activity.

Wheelchair tennis star Jordanne Whiley and Paralympic table tennis silver medallist Will Bayley have also got involved in the video.

“In this Paralympic year we are delighted to be partnering with the British Paralympic Association and giving our support to ParalympicsGB on their journey to Rio and beyond while giving consumers something they constantly call for – a chance to eat their much-loved Cadbury Mini Eggs outside of its traditional season,” Declan Duggan, brand manager for Cadbury Bitesize, added.

The announcement was made to coincide with the 100 Days To Go milestone until the Rio 2016 Paralympics begin with the Opening Ceremony on September 7.