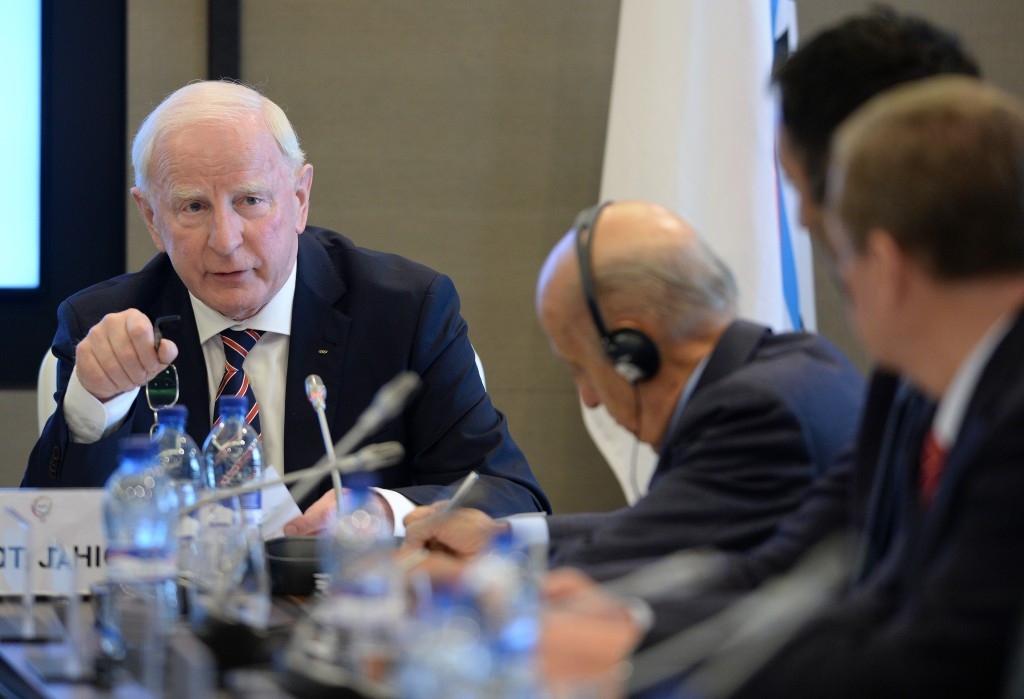 Letters continue to be exchanged between the European Olympic Committees (EOC) and stakeholders in the inaugural 2018 European Championships as a row intensifies over sporting participation at multi-sport events.

This follows an alleged clause in the contract for the new event - due to be co-hosted in Glasgow and Berlin - supposedly forbidding Federations "competing in another multi-sport continental event within a year of the conclusion of the 2018 European Sport Championships".

Such a rule would seemingly include the EOC-organised 2019 European Games and both summer and winter editions of the European Youth Olympic Festival.

Details of this clause remains disputed, but another preventing official continental championships being held in conjunction with any other multi-sport events - including the European Games - was certainly included.

EOC President Patrick Hickey has already sent a letter to Federations criticising the alleged clause as an "attempt to restrain your Federations' trade, manipulate the sports market in Europe and generally threaten the great institutions of European sport".

He has raised the matter with the International Olympic Committee (IOC) and expects it to be discussed in detail at next month's IOC Executive Board meeting in Lausanne.

He also believes it marks a breach of European Union Competition Law.

Further letters have now been sent to the European Broadcasting Union (EBU) - who are heavily involved and are expected to showcase the inaugural event - and both Glasgow and Berlin authorities.

In the letter to Glasgow City Council (GCC), obtained by insidethegames, Hickey claims to be "surprised" the GCC would be "centrally involved in an enterprise which breaches European Law in such a flagrant manner", adding that "this is something the EOC will not tolerate".

The EOC letter threatens to take up the issue with the EU in Brussels, who, as "you are no doubt aware, has the authority to levy very serious fines on those undertakings involved in a breach of EU Competition Law".

"It is quite astonishing that the EBU which is funded by the taxpayers of Europe would be centrally involved in an enterprise which breaches European Law in such a flagrant manner," Hickey adds in his separate letter to the EBU.

But the European Sports Championship Management (ECSM) organisers have disputed having inserted the controversial clause, with director Jon Ridgeon claiming last month that they "wouldn't dream of blocking any Federation from competing at another multi-sports event".

They did, however, admit to having come to a "collective decision that no other official European Championships would be held at multi-sport events".

The EBU hit back in an equally strongly worded letter to the EOC, also seen by insidethegames, in which they accused them of making "numerous inaccuracies" and "unfounded and serious allegations".

"It is with deep regret that we note that the spirit of partnership, as well as the principle of providing the Olympic Games free-to-air to the largest possible audience, has been abandoned”, they note.

The European Championships are seen as a rival to the EOC-organised European Games, first held in Baku last year and due to take place for a second time in 2019.

Athletics is scheduled for the German capital at the European Championships, while aquatics, cycling, golf, gymnastics, rowing and triathlon action will all take place in the Scottish city.

Another letter has been sent this week by European Athletics President Svein-Arne Hansen and his European Swimming Federation counterpart Paolo Barelli on behalf of the European Championships Board in order to "clear up any misunderstandings".

It is also claimed that the Board "does not and will not prevent any of the sports from participating in other multi-sport events".

The EOC plans to now study the letter before deciding whether to take further action.

"The EOC has only just received the letter from the EFs and we will now study it carefully to see whether it addresses our concerns over a specific restrictive clause in the contract that European Federations are being asked to sign relating to other future multi-sport events," they told insidethegames this evening.

"When we have analysed this we will revert back to the EF Presidents to clarify matters as required.

"It is important to understand that the EOC supports the objectives of the ECS as long as it respects the fundamental principles of the Olympic Charter, Olympic Agenda 2020 and all relevant aspects of the EU constitution.”

ECSM opted not to comment when contacted as they claim it is now an issue for the sports to discuss with the EOC.

insidethegames has been told that the contract clause applies only to the five sports of cycling, gymnastics, golf, rowing and triathlon.

Cycling, gymnastics and triathlon featured at Baku 2015 and are expected to be on the programme in 2019, the second edition for which Russia remains the preferred but unconfirmed host.

Russian Sports Minister Vitaly Mutko said earlier this month that they "never sent" an application and are "absolutely busy" until 2020 when asked on his country's hosting.

This all marks the latest dispute between sporting events which are "official" and with supposedly unsanctioned rivals after the International Basketball Federation (FIBA) announced its "full support" of FIBA Europe's decision to ban teams from international competition for backing the EuroLeague, currently the continent's premier club competition.

Hickey claimed last month that this decision was needed to protect the integrity of sport.