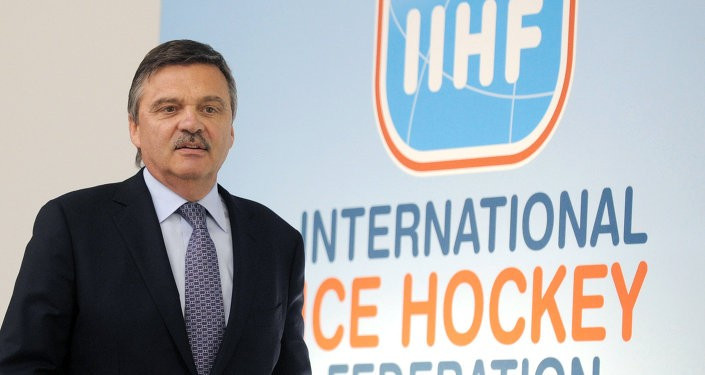 René Fasel was today officially re-elected as President of the International Ice Hockey Federation (IIHF) at its Annual Congress in Moscow.

It will be his sixth term since first being elected in 1994 at the IIHF Congress to replace Germany's Günther Sabetzki.

The 66-year-old Swiss was unopposed and re-elected unanimously.

Providing he completes his latest four-year stint, though, he will pass Paul Loicq as the longest-serving President in the 108-year history of the IIHF.

The Belgian, like Fasel, a former referee, served for 25 years from 1922 until 1947 and is credited with helping increase the popularity of ice hockey in Europe.

Loicq also helped the sport establish itself as part of the Olympic programme after being included in the first edition of the Winter Games at Chamonix in 1924.

The biggest challenge of the first half of Fasel's latest mandate will be trying to broker a deal that allows the top National Hockey League players from North America compete at the 2018 Olympics in Pyeongchang.

Their participation is currently in doubt because of concerns over insurance and transportation costs.

“The success of international ice hockey has been achieved thanks to consensus among stakeholders," Fasel told the Congress.

“We have two Olympic Games upcoming in Asia.

"Asia is a very big continent with a big population and I’m happy to continue to serve as a bridge and make hockey better known in Asia.

"It’s an exciting time for hockey in Asia,”

As well as Fasel, the IIHF's three vice-presidents were also re-elected.

Finland's Kalervo Kummola will continue his mandate as vice-president representing Europe and Africa, Canada's Bob Nicholson for the Americas and Hong Kong's Thomas Wu for Asia and Oceania.

Chunlu Wang from China withdrew her application before the election.

Elections were also held for the IIHF's ruling Council.

Hungary's Zsuzsanna Kolbenheyer was re-elected as one of two statutory female members and was joined by Poland's Marta Zawadzka.

Also elected for the first time was Franz Reindl, an Olympic bronze medallist at Innsbruck 1976 and who is now President of the German Ice Hockey Association.

Vladislav Tretiak, President of the Ice Hockey Federation of Russia and well known as a goaltender legend, got the highest number of votes from the re-elected male members.

He was joined by Luc Tardif and Henrik Bach Nielsen, Presidents of the French and Danish Ice Hockey Federations respectively, who also were re-elected.

Also joining the Council is 32-year-old Sergej Gontcharov, nominated by the Belarusian Ice Hockey Association where he serves as a Board member and previously as the general secretary.

Gontcharov, who grew up in Germany, worked in Ukraine as chief executive of Lviv's bid for the 2022 Winter Olympics and Paralympics, which was abandoned because of the problems in the country, and as an advisor to Sergey Bubka, the Ukrainian IOC Executive Board member and President of the National Olympic Committee.

He replaces Tony Rossi, who retired from his position with the Council.

The final place was filled by the Czech Republic's Petr Briza.

He beat Sweden's Peter Forsberg 57-39 following a re-run after they had both originally polled 44 votes each.

Briza, general manager of Sparta Prague, one of the biggest clubs in the Czech Republic, is the first member from his country since the late Miroslav Subrt, who served on the Council for 44 years.

The Congress elected two IIHF auditors for a four-year term.

Outgoing Council member Christer Englund, who did not run for re-election after retiring as President of the Swedish Ice Hockey Association, was elected and Switzerland's Fabio Oetterli was also reinstated for this position.