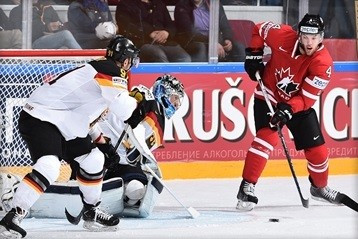 Canada joined Finland as the second team to continue their 100 per cent record at men’s the International Ice Hockey Federation (IIHF) World Championship as they overcame Germany 5-2 at the Yubileyny Sports Palace in St. Petersburg.

The defending champions didn’t have it all their own way in what was a hard-fought contest but they managed to edge over the winning line to move above the Scandinavian outfit to the summit of Group B.

Germany had come into the match full of confidence having beaten Slovakia in their previous game but they quickly found themselves a goal down as Taylor Hall maintained his record of scoring in every match so far to put the 25-time winners ahead.

Canada then doubled their advantage in the second period thanks to Corey Perry, before the Germans hit back with two quick-fire goals through Patrick Reimer and Sinan Akdag to draw level.

Germany weren’t quite able to build on that platform, however, as Hall netted his second of the match to reinstate Canada’s lead and it was one they never relinquished.

Further strikes from Boone Jenner and Cody Ceci late on put the gloss on the triumph for Canada, who remain the ones to beat at the competition in Russia.

“We knew we were playing a good opponent, and we had a couple of breakdowns." Perry said.

"They capitalised on it.

“We talked between the second and third.

“It was a little adversity.

“We just had to be a little quicker to the puck, a little more physical, and start wearing their D down.

“Once we did, we got some bounces.”

Elsewhere in Group B, the United States kept up their pursuit of a place in the quarter-finals alive as three second period goals helped them to a comfortable 4-0 win over France.

In Group A, hosts Russia put on a show for the considerable crowd inside the Moscow Ice Palace as they thrashed Denmark 10-1.

Vadim Shipachyov was the star performer for the Russians, billed as the pre-tournament favourites, as he scored twice and provided three assists in what was a comprehensive display.

Despite the convincing nature of their triumph, Russia still trail the Czech Republic in the group after they breezed to a 7-0 rout in their clash with Norway.