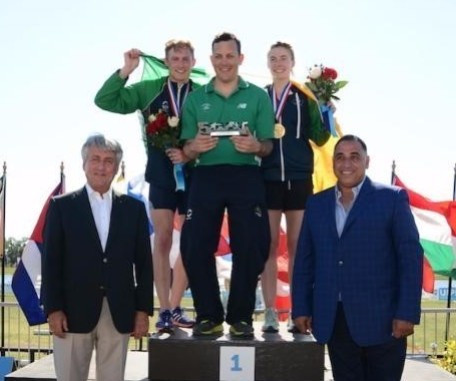 The result saw the Irish go one better than the silver medal they claimed at the 2015 World Cup Final with the champions that day - Katsiaryna Arol and Mikalai Hayanouski of Belarus - having to settle for second this time around.

"Last year we had three silvers in World Cups so we were pretty damn hungry coming into this one and we're delighted.

"I love the mixed relay, I think it's fantastic to watch because it's male and female and it's such a different tempo.

Lanigan-O'Keeffe, the European champion who made headlines in March after he was ejected from a flight for carrying fencing equipment, added: "I train closely with Natalya all year round so it's great to compete together and we are a great team.

"Wherever one of us has a shortfall, the other seems to find an answer.

The Irish were one of only two pairs to clock under two minutes in the swimming, alongside Americans Samantha Achterberg and Logan Storie.

The Ukraine pair won the fencing ranking round with 26 wins, ahead of Belarus and the Irish, but the eventual winners then faltered in the riding as they incurred 20 penalty points.

This left them five seconds adrift of the pace at the start of the combined run/shoot, with quick and effective firing at all four ranges proving key in Ireland's victory.

Mixed relay is not an Olympic discipline but that is something UIPM President Klaus Schormann wants to change.

"For the spectators, today showed that the mixed relay is really a theme event that we must promote, with more and more nations competing," he said following the action at the American venue.

"At the World Championships in Moscow there will be 24 nations and we will present a strong argument to the International Olympic Committee that the mixed relay is the team event we need for the future."

Attention now turns to the World Championships in the Russian capital - between May 23 and 29.