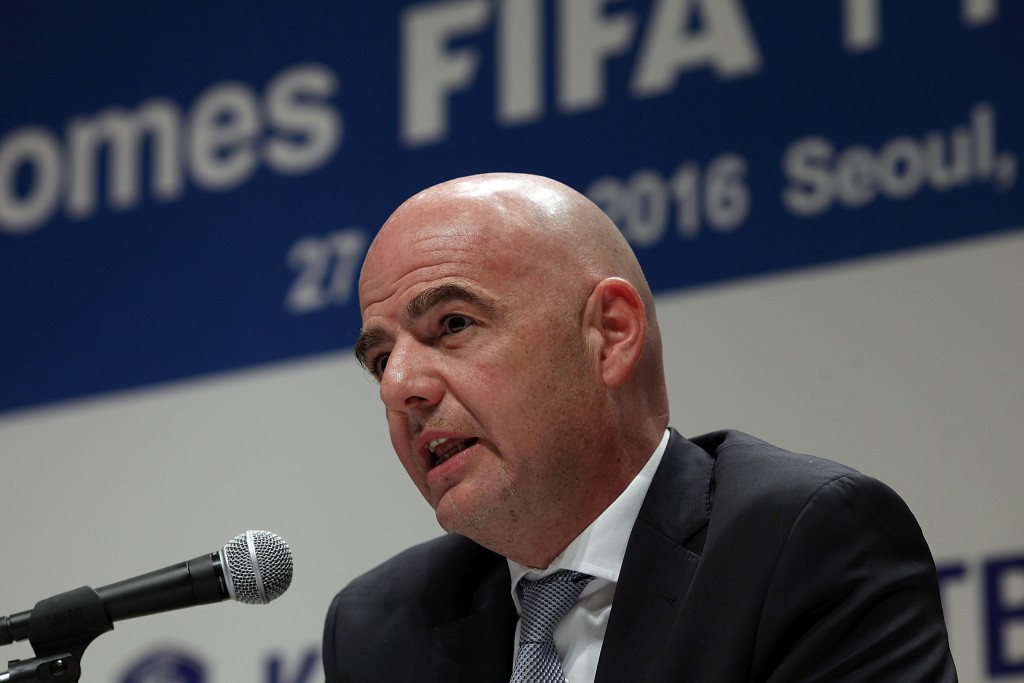 FIFA President Gianni Infantino admitted here today that he was “very sad” after former colleague Michel Platini failed with his bid to have his six-year ban from football quashed by the Court of Arbitration for Sport (CAS).

The French UEFA President's ban has been lowered from six to four years, although this is still likely to signal the end of the 60-year-old's career in the sport.

Platini also confirmed he will resign as the head of world football’s governing body as a result of the CAS verdict.

He has now seemingly exhausted all avenues in his attempts to overturn the ban handed to him by world football's governing body FIFA.

It came following a now infamous “disloyal” payment of CHF2 million (£1.5 million/$2 million/€1.8 million) made to the Frenchman by Switzerland's former FIFA President Sepp Blatter in 2011.

Infantino, speaking here following the opening day of the inaugural meeting of the rebranded FIFA Council ahead of his first Congress at the helm of the corruption-plagued organisation, said he must “respect” the CAS decision.

The Swiss also refused to be drawn on whether FIFA will attempt to recover the CHF2 million Platini received, insisting “now is not the moment to discuss these things".

“Obviously as FIFA President I need to respect the decision of the CAS,” he said.

“On a personal level, of course I am very sad about the decision.

"I have worked with Michel for the last nine years in UEFA, seven as general secretary.

“Together we did some great things in UEFA and I really want to keep those positive memories and in this moment focus on the positives.”

Both Platini and Blatter were initially banned for eight years, although FIFA's Appeals Committee slashed the sanctions to six years in February.

CAS has now ruled that even this time-frame was "too severe" but was still highly critical of Platini following a hearing in Lausanne on April 29.

Question marks had always been raised about the payment which Platini claims was for work he carried out at FIFA between 1998 and 2002.

Although FIFA has already ruled that the money was not a bribe, the nine years it took for him to receive the balance has always been contentious.

In a statement, CAS said they were not convinced by the "legitimacy" of the payment.

The fact that it was paid at a time when Blatter was a FIFA Presidential candidate - battling Mohamed Bin Hammam - also raises conflict of interest allegations.

Platini had become a member of FIFA's ruling Executive Committee in 2002, when the work agreement between the pair was ended.

Blatter and Platini had also agreed the deal orally - another fact which worked against the Frenchman - with CAS ruling he also benefitted from a pension plan to which he was not entitled.

"The arbitral panel noted the existence of a valid employment contract between Michel Platini and FIFA, signed in 1999 and including an annual salary of CHF300,000," the CAS statement said.

"Such contract was performed by the parties and terminated in 2002 when Mr Platini became a member of the FIFA Executive Committee.

"It was not until 1 February 2011 - four months prior to the FIFA Presidential elections and at a moment when Sepp Blatter and Mohamed Bin Hammam were both still candidates to the election - that FIFA paid the amount of CHF2 million in favour of Mr Platini.

"Mr Platini justified such payment as back pay, explaining that he had orally agreed with Mr Blatter in 1998, when the future FIFA President was negotiating with him, to an annual salary of CHF1 million.

"The Panel, however, was not convinced by the legitimacy of the CHF2 million payment, which was only recognised by Mr Platini and Mr Blatter, and which occurred more than eight years after the end of his work relations, was not based on any document established at the time of the contractual relations and did not correlate with the alleged unpaid part of his salary.

"Moreover, the Panel took note that Mr Platini benefitted from the extension of a pension plan to which he was not entitled.

"Consequently, the CAS arbitrators unanimously determined that Mr Platini obtained an undue advantage in breach of Article 20 of the FIFA Code of Ethics.

"Furthermore, the Panel also found Mr Platini guilty of a conflict of interest in breach of Article 19 of the FIFA Code of Ethics."

Despite the CAS being sport's highest court - Platini made reference to battling on within the Swiss courts.

“I take note of today’s decision from CAS but I see it as a profound injustice,“ he said.

"This decision inflicts a suspension on me that, as luck would have it, stops me from contesting the next election for the FIFA presidency.

“As agreed with the national associations, I am resigning from my duties as UEFA president to pursue my battle in front of the Swiss courts to prove my innocence in this case.

“Life is always full of surprises: I am henceforth available to experience more of them.”

In cutting Platini's ban - CAS rapped FIFA for not investigating the matter sooner - with the four year sanction now mirroring a Presidential term.

"The Panel noted that FIFA knew of the payment in 2011 but initiated an investigation into Mr Patini’s behaviour with the FIFA Ethics Committee in September 2015 only," the CAS statement said.

"The CAS Panel considered that the suspension imposed by FIFA on Mr Platini was nevertheless too severe and therefore decided to reduce such suspension to four years, which corresponds to the duration of a Presidential term.

"The CAS Panel was of the opinion that a severe sanction could be justified in view of the superior functions carried out by Mr Platini (FIFA vice president and UEFA President), the absence of any repentance and the impact that this matter has had on FIFA’s reputation.

Today's decision means Europe's governing body UEFA - which has strongly backed the Frenchman - will need to elect a new President.

Spaniard Angel Maria Villar is currently serving as acting head, with Platini now barred from his home European Championships in France in June and July.

The Frenchman, who managed France for four years between 1998 and 1992, was one of the best midfielders of his generation, winning the prestigious Ballon d'Or prize three times.

Blatter, who was among the witnesses at Platini's hearing, has also taken his case to CAS.