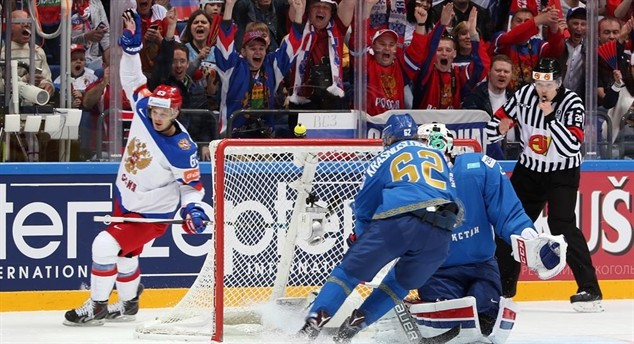 Hosts Russia are up and running at the International Ice Hockey Federation (IIHF) World Championship after breaking down the resistance of Kazakhstan with a 6-4 victory today.

The pre-tournament favourites suffered a shock 3-0 opening day defeat to Czech Republic in Group A and made heavy weather of a battling Kazakh side who were buoyed by a shock penalty shots win over Switzerland yesterday.

Russia had Anton Belov to thank for their victory at Moscow's Ice Palace as he bagged two goals and claimed two assists, but with the score locked at 4-4 in the final period this was still a nervy encounter for the home fans.

Six goals were scored in an exciting opening period which saw the game swing back and forth.

Yevgeni Dadonov squeezed home the opening goal after six minutes to settle Russian anxiety, but Dustin Boyd - one of the North American born players on the Kazakhstan team - levelled on the power play.

The Kazakhs, ranked 17th in the world, then stunned the world number two side as Roman Starchenko found the net with a fine finish.

Roman Lyubimov levelled again and Sergei Mozyakin then put Russia in front once more during a five-on-three.

Kazakhstan would not go away, however, and Yevgeni Rymarev netted on another power play to make it 3-3, still inside the first 20 minutes.

Belov made it 4-3 in the second stanza but Maxim Semyonov equalised again just a minute into the final period with the home crowd becoming increasingly edgy.

Another Belov goal settled things, however, and there was no way back for Kazakhstan this time as Roman Lyubimov deflected home to give Russia some breathing space.

"Today we were a bit calmer but we still made a lot of mistakes.

"When we started scoring we gained in confidence."

In Group B in Saint Petersburg, defending champions Canada racked up a second win by thrashing Hungary 7-1.

Mark Scheifele gave them the lead before captain Corey Perry doubled the advantage.

Hungary, who lost 4-1 to Slovakia in their first game, then netted through Istvan Bartaus, the first goal they had scored against the Canadians at World Championship level for 78 years.

It offered just a brief respite, however, as Mark Stone, Brad Marchand, Derick Brassard, Michael Mattheson and Taylor Hall added gloss to the scoreline for the world number ones, who beat fierce rivals United States 5-1 in their first match.

Elsewhere in Group A, Norway beat Switzerland 4-3 after overtime for their first win and a second defeat for the Swiss outside of regulation time.

Sweden won for the second time with a 5-2 success over neighbours Denmark.

Finland made it two wins from two in Group B, condemning Germany to a second loss with a 5-1 win, while Slovakia beat France 5-1 for a second victory.