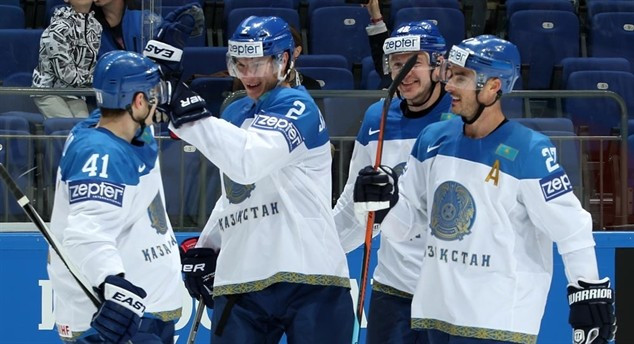 The Swiss, ranked seventh in the world, were highly fancied to beat the 17th ranked Kazakhs but were held to a 2-2 draw after all three periods and overtime, taking the Group A contest to a shoot-out.

Canadian born Nigel Dawes was then the hero, scoring with two efforts as Kazakhstan won both the penalty shots, and the match, 3-2.

In the round-robin Dawes scored to the right of the goal and he then fired home to the left in the first round of sudden death.

The first four players of the shoot-out all scored and the last two missed, before Dawes' second goal.

Goaltender Vitali Kolesnik didn't even have to make a save for the win as Lino Martschini, who also scored in the round robin, lost control of the puck and didn't even get a shot away for the Swiss.

It was Kazakhstan's first win against the Swiss in their history.

"It's an historic moment for us," Kolesnik said.

Dawes also missed a penalty shot in regulation time which in the end didn't matter.

Samuel Walser had given Switzerland the lead before Roman Savchenko equalised with a bizzare goal that eluded goaltender Reto Berra from range.

Roman Starchenko put Kazakhstan into the lead in the third period before Denis Hollenstein levelled.

Kazakhstan have been described as “Canakhstan” due to the North American influence of Dawes, Brandon Bochenski and Dustin Boyd in their line-up.

Elsewhere in Group A, Denmark saw off Scandinavian rivals Norway with a 3-0 victory.

Czech Republic backed up their 3-0 opening win over hosts Russia by seeing off Latvia 4-3 following a shoot-out.

In Group B in Saint Petersburg, Slovakia began by beating Hungary 4-1 while France defeated Germany 3-2.

United States recovered from their 5-1 opening loss to rivals and defending champions Canada by winning an exciting game against Belarus, 6-3.