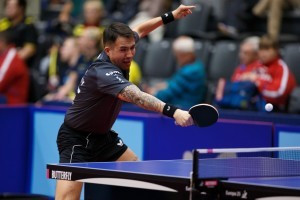 Great Britain’s Will Bayley and Rob Davies both claimed singles gold medals at the International Table Tennis Federation (ITTF) Para Table Tennis (PTT) Slovenia Open in Laško to lay down a significant marker ahead of this year’s Paralympic Games in Rio de Janeiro.

He had earlier avenged his defeat by Jordi Morales in February’s Italian Open, beating the Spaniard 3-2 in a tense quarter-final, and then defeated world number four Mykhaylo Popov of Ukraine in the last four.

"I’m massively thrilled because it has been a lot of hard work," said the 28-year-old.

"There were definitely times that maybe people doubted me but I stuck to what I know best and have worked as hard as I can and it’s starting to pay off.

"But it’s not done yet - I still need to push on now and improve even more but it’s a good marker at the moment to where I am."

In a repeat of the all-British European Championships final in 2013, Davies survived a spirited fightback from fellow Welshman Paul Davies to win the men’s class one final 3-1.

The 31-year-old came through his quarter-final against Switzerland’s Silvio Keller 3-1 and then beat the Paralympic champion Holger Nikelis of Germany 3-0 in the semi-finals.

"I am really happy," said the triumphant Davies.

"At the start of the competition I really wanted to get to the final and I did that and when I saw that Paul was in the final as well it was a bit surreal."

A runners-up finish for 49-year-old Davies marked a sensational comeback from the London 2012 bronze medallist, who beat world number two Jean-Francois Ducay of France 3-1 to reach the final after two years out through injury.

Britain’s Kim Daybell looked to be heading for the final of men’s class 10 when he took a 2-0 lead against the world number seven Lian Hao.

He ultimately had to settle for bronze though as his Chinese opponent worked his way back into the match and eventually clinched it 11-8 in the fifth.

The competition continues with the team event, which is due to finish on Saturday (May 7).