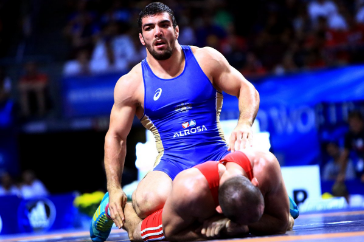 The final 36 wrestling berths for Rio 2016 will be up for grabs this weekend as the second World Olympic Games Qualifying Tournament takes place at the Bagcilar Sports Complex in Istanbul.

In Istanbul, two berths in each of the 18 wrestling events scheduled for this year’s Olympics will be awarded to the NOCs of the top two wrestlers in each discipline and weight category.

Russia are the leading country heading into the last qualification tournament with 15 berths, including tickets for all 12 men’s events.

Azerbaijan are second with 13, followed by China, Kazakhstan and the United States with 12 each.

A total of 17 of the 58 countries have qualified in all three disciplines - Greco-Roman, freestyle and women’s wrestling - while 19 others have secured berths in only one.

Azerbaijan have qualified for all six events in freestyle along with Russia, Iran and Georgia, while Egypt is the only country other than Russia to have booked all six slots in Greco-Roman.

In the women’s events, Japan and Canada will be sending full squads to Rio de Janeiro.

The event is due to begin tomorrow with one of the biggest names in the sport over the last decade, Iran’s Hamid Soryan, still looking to secure a place at Rio 2016.

A win in Istanbul for the London 2012 gold medallist and six-time world champion would give Iran entrants in all 12 men’s events.

Soryan, who notched his most recent world title in 2014, was tripped up in the round of 16 in Ulaanbaatar by 2013 world champion Ivo Angelov of Bulgaria.

Angelov, in turn, fell in the quarter-finals, knocking Soryan out of contention in the first world qualifier.

He is on Bulgaria’s entry list for Istanbul but Soryan remains a question mark as late entries continue to trickle in.

If not Soryan, Iran could go with Asian silver medallist Saman Abdoulvali.

Ukraine’s Alina Makhinya and Belarus' Vanesa Kaladzinskaya are the only world champions from this most recent Olympic cycle still looking to qualify for Rio 2016.

Makhinya, who was third at the European qualifier in Serbian city Zrenjanin, comes in as the favourite at 69kg, but could face 2014 world bronze medallist Laura Skujina of Latvia for a ticket.

London 2012 Olympian Kaladzinskaya, who was fifth at 53kg in Zrenjanin, is entered at 48kg and faces a possible showdown with 2014 world silver medallist Iwona Matkowska of Poland.

Two-time world champion Ibragim Aldatov of Ukraine is the biggest name waiting to qualify in the freestyle events.

Aldatov was on the wrong end of a decision after a 3-3 draw with Belarus’ Amarhadshi Magomedov in the 86kg semi-finals in Zrenjanin.

Although he will be the favourite in Istanbul, Baku 2015 European Games silver medallist Piotr Ianulov of Moldova and Asian Games bronze medallists Kim Gwak-Uk of South Korea and Umidyon Ismanov of Uzbekistan could present the biggest obstacles to reaching his third Olympic Games.