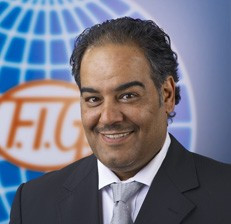 Saif Abouedel, a member of the International Gymnastics Federation (FIG) Executive Committee, has passed away.

The governing body announced that the 48-year-old Kuwaiti died following a long battle with illness.

Abouedel was President of his country's Gymnastics Federation, and also headed the Arab Gymnastics Union.

He was first elected as a FIG Council member in 2009 and then made the step-up to the Executive Committee in 2012.

A former gymnast, Abouedel was secretary general of the Kuwait Gymnastics Federation from 2004 to 2013 when he was elected President.

He has also served his sport as deputy secretary general of the Asian Gymnastics Union.

FIG President Bruno Grandi led the tributes to Abouedel, whose native country remains the subject of an International Olympic Committee suspension due to Government interference.

If this ban is not lifted in time for Rio 2016, the country's athletes will have to compete in the Brazilian city under the Olympic flag.

“We are saddened by the loss of Saif Abouedel, who played an important role in the development of our sport in Kuwait and the whole Arab world," said Grandi, who is due to step down as FIG President after 19 years at the helm at the body’s Congress in Tokyo in October.

"The entire gymnastics family wishes to express its profound sorrow and grief to his family.”