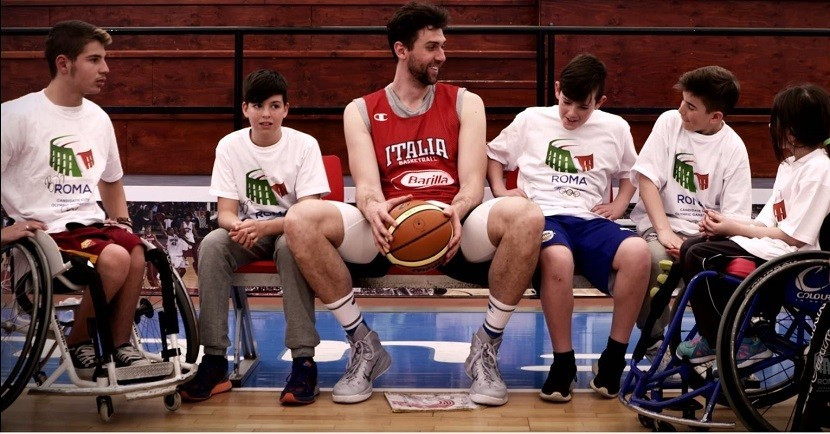 Italian basketball player Andrea Bargnani has featured in the latest promotional video for Rome's bid for the 2024 Olympic and Paralympic Games.

The former Brooklyn Nets power forward also held a question and answer session for a group of young basketball and wheelchair basketball players between the ages of eight and 12 years old.

Bargnani answered questions about his own career, including his spell in the National Basketball Association (NBA), as well as his experiences in playing for the Italian national team.

The 30-year-old told the young players that the 2024 Summer Olympic Games “belong to you” at Rome’s EuroBasket training centre, where the Italian team are preparing for their home Olympic qualifying tournament that will take place in Turin.

“For Turin we have to try to train as much as possible in the short time available,” Bargnani said.

“We must try our best but we’ll need some luck as well.

The Italian team are among a group of countries still in danger of missing this year's Olympic Games in Rio de Janeiro after the International Basketball Federation (FIBA) announced their "full support" of FIBA Europe's decision to ban 14 teams.

FIBA Europe sent letters to the 14 countries warning them about their association with the un-sanctioned Euroleague - currently the continent's premier club competition.

Any Federation that backs the Euroleague - run by Euroleague Commercial Assets (ECA) - could automatically lose the right to participate in senior men's national team competitions, including the Olympic Games, they warned.

Italy were among six nations, which also included Greece, Israel, Lithuania, Poland and Turkey, who received letters drawing their attention to "recent reports and public statements" which suggest that one or more of their clubs may have entered into an agreement with ECA.

Eight countries - Bosnia and Herzegovina, Croatia, Macedonia, Montenegro, Russia, Serbia, Slovenia and Spain - have leagues or clubs which have entered into an agreement with the ECA.

Italy, Serbia, Turkey, Greece and Croatia are the European teams still hoping to reach Rio as they are all due to play in the Olympic qualification tournaments.

Spain and Lithuania have already booked their places in Rio, with Italy's scheduled hosting of one of the qualification tournaments adding an extra complexity.

The video featuring Bargnani is one of a collection of video interviews which are being launched by Rome 2024 as they seek to promote their bid.

Each of the videos features athletes being asked questions by children, with Rome 2024 claiming this is a “metaphorical handover” in which champions share their experiences to help the children grow as athletes.

Budapest, Los Angeles and Paris are also bidding for the 2024 Games, with the International Olympic Committee due to make a decision in Lima next year.