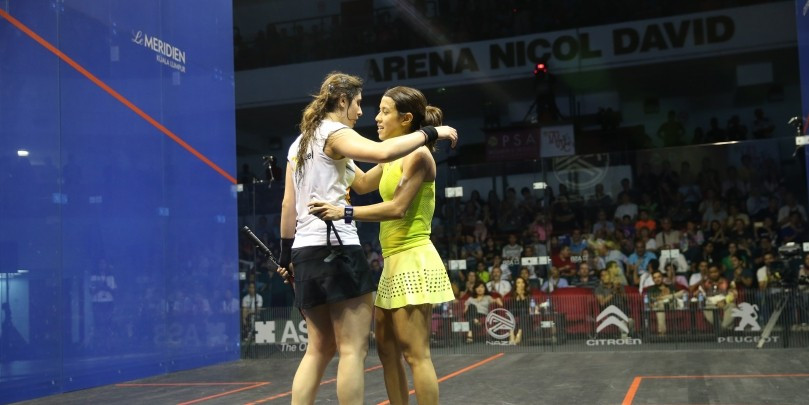 Despite surrendering a 1-0 lead to allow her Malaysian opponent to level proceedings, El Sherbini displayed her full range of attacking artistry in the next two games as she hit some sensational cross-court nicks to claim an 14-12, 4-11, 11-3, 11-7 victory.

As well as sending her through to the last four of the competition, it also extends her winning streak over the eight-time world champion David to five matches.

"This is the fifth time I’ve played Nicol this season and I think that this was the best match we have played against each other," said El Sherbini.

"I always think match by match and I try not to look forward - I just want to focus on the next match.

"Of course, I definitely want to win the tournament and everyone wants this, but I’m just going step by step."

Up next for El Sherbini is a meeting with 18-year-old world junior champion Gohar, who she beat in the final of last month’s British Open in Hull.

Gohar came out on top against world number four Camille Serme of France in a thrilling five-game contest.

Having lost a 2-0 lead, Gohar looked as if she was heading out of the tournament after going 7-4 down in the fifth.

The world number one cantered to the opening game and, a second game defeat aside, looked in strong form as she brushed aside her Egyptian opponent.

Action in Malaysia's capital is set to continue tomorrow.