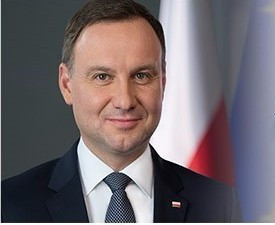 Poland’s President Andrzej Duda will be a patron of the 2017 World Games in Wrocław, it has been announced.

The decision was confirmed by Maciej Łopiński, Secretary of State in the Chancellery of the President, in a letter to Wrocław Mayor Rafał Dutkiewicz and was then revealed by the Organising Committee.

“It is my great pleasure to inform you that the President of the Republic of Poland has accepted your invitation to become honorary patron of The World Games 2017,” Łopiński said.

“This is a prestigious sports event with the best athletes from all over the world participating.

“The President believes that hosting a sports event on such a large scale will attract major attention from the fans and the media.

“It will become an outstanding opportunity to promote Wrocław and Poland.”

The news follows Wrocław 2017 making two key appointment as preparations for next year’s event, which runs from July 20 to 30, continue to gather pace.

The Organising Committee recently gave an update on progress at the International World Games Association General Assembly, held during the 2016 SportAccord Convention in Olympic capital Lausanne.

Marcin Przychodny was chosen as President of the Organising Committee, while Adam Roczek has been named as his deputy.

Przychodny takes over as the head of the organisation from Piotr Przygonski, whose tenure as President ended last month.

He has previously held roles within the Organising Committee of the UEFA European Championship in 2012, jointly held in Poland and the Ukraine, as well as the International Ski Federation Cross-Country World Cup in Szklarska Poręba in Poland in 2014.

Roczek, was chosen as vice-president of Wrocław 2017, a position which had been vacant since the summer of last year.

The 2017 World Games in the Polish city were originally due to be held from August 3 to 13 but were moved to July 20 to 30 in order to avoid a clash with the 2017 International Association of Athletics Federations World Championships in London.

Wroclaw was awarded the Games in 2012, beating off opposition from Hungary's capital Budapest, now a candidate city for the 2024 Olympic and Paralympic Games.