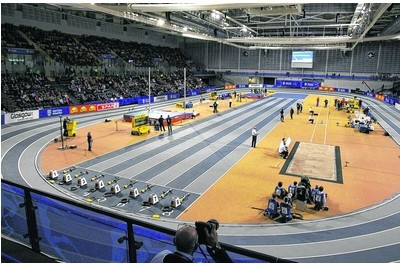 Glasgow has been awarded the 2019 European Indoor Athletics Championships, it was announced today.

The Scottish city was chosen by European Athletics at its Council meeting in Amsterdam today ahead of Apeldoorn in The Netherlands, Minsk in Belarus and Torun in Poland.

Glasgow were chosen with nine votes ahead of Torun with six and Apeldoorn with one.

The event will be held at Glasgow’s Emirates Arena, which earlier this year hosted the prestigious Indoor Grand Prix, the world’s leading indoor athletics event, and the British Athletics International Match from 2013 to 2015.

More than 600 athletes from the 50 European Athletics Member Federation countries are expected to participate in the three-day event, making it one of the biggest sporting events ever to be held in Glasgow.

More recently it was staged in Birmingham in 2007.

"Glasgow has assured us today that we can look forward to an event of the highest standard."

The next edition of the European Indoor Athletics Championships is due to take place at the Kombank Arena in Belgrade next year between March 3 and 5.

The event in Glasgow will follow only a few months after the city is due to co-host with Berlin the inaugural European Sports Championships in 2018.

The European Athletics Championships will be in Berlin and Glasgow will host the aquatics, cycling, gymnastics, rowing and triathlon, along with a new golf team championships.

The European Sports Championships are seen as an opportunity for Glasgow to host another major event following the success of the 2014 Commonwealth Games.

“Securing this event for the Emirates Arena, just a few months after the inaugural European Championships, cements Glasgow’s position as one of the world’s leading sporting cities and places Scotland at the very heart of European sport," said Paul Bush, director of events at VisitScotland.

"We look forward to working closely with European Athletics in the coming months to deliver this landmark event in one of our flagship venues.”