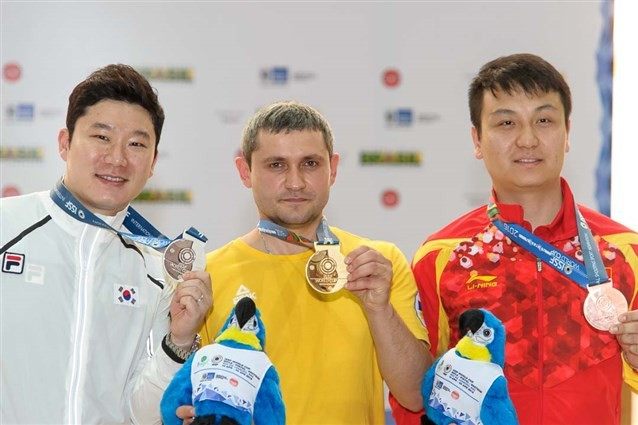 The 32-year-old, the European champion in 2014, got the better of South Korea's triple Olympic champion Jin Jongoh, who had led the final for the first 18 shots.

Omelchuk, who was 4.2-points behind Jin after the fifth series, narrowed the gap with good shooting in the following three.

The Korean, however, went astray and fired five out of six shots outside of the 10th ring.

The Ukrainian went into the lead with an almost-perfect 10.7 on his second-to-last shot and sealed his victory with a 9.7.

"Actually, I expected this match to be easier because I was counting on the experience I gained during the 10m air pistol final,” said Omelchuk.

There was also gold at the Deodoro Shooting Centre for Australia's James Willett, who won in the men's double trap.

He beat Russia's London 2012 bronze medallist Vasily Mosin into silver via a shoot-off after both men ended level.

Mosin missed his very first target and Willett made no mistake to claim his first title at World Cup level.

"It looks like I’m peaking at the right moment,” said Willett.

“I only started shooting double trap in 2014, and it feels great to win some medals and be on top of the podium.”

The event in Rio will continue tomorrow with the women's 25m pistol final.