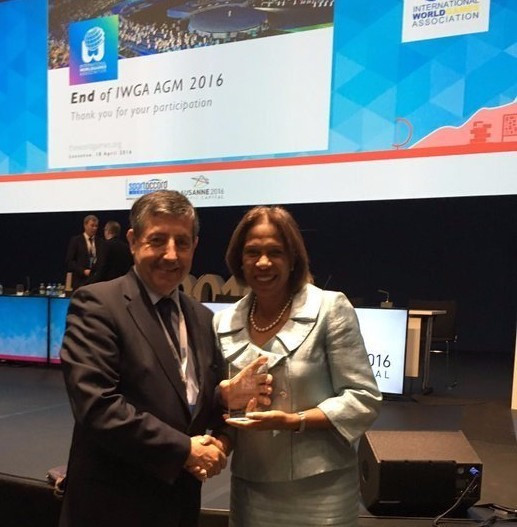 The honour was passed to Rhone by the IWGA President José Perurena.

Kumwenda, who plays for professionally for Mainland Tactix in Christchurch in New Zealand, was announced as the winner of the award in February.

It followed an online poll, which saw athletes’ nominated from a cross section of sports.

After receiving the award on the Malawian star’s behalf, Rhone paid tribute to the influence Kumwenda has had in her own country and to young girls.

“Winning this Award is not only good news for Mwai but for her country, Malawi, and netball in general," said Rhone.

“Mwai has excelled through hard work and dedication to netball and is really deserving.

“She is a great role model for young girls and I congratulate her most heartily.”

Kumwenda was among 18 nominees for the award, following her outstanding performances at the 2015 Netball World Cup in Sydney, where she was crowned Player of the Tournament.

She scored a total of 321 goals in eight games at the tournament, the only player to breach the 300 mark, with 91 per cent of her shots being on target.

Kumwenda’s influential displays had helped her country finish in fifth place at the tournament and they now occupy sixth in the overall world rankings.