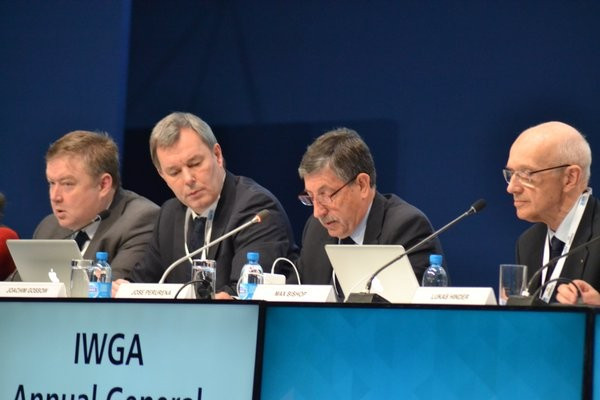 Two radical proposals to reform the voting procedures and sports programme for the World Games were rejected following fierce debate to approve new statutes at the organisation's Annual General Meeting here this morning.

Changes to the International World Games Association (IWGA) constitution and bylaws had been examined by the ruling Executive Committee as well as a special Working Group, which presented their findings to the membership for approval.

Special dispensation was also given, however, for International Federation of BodyBuilding and Fitness (IFBF) President Rafael Santonja to take the floor to make two specific proposals to the members which were neither supported nor endorsed by the Executive Committee or the Working Group.

These concerned the transferring of the decision-making proposals to select World Games host cities from the Executive Committee to the membership-at-large, as well as guaranteeing that all IWGA members will automatically appear at each edition of the quadrennial Games.

Last year's decision to award Birmingham, United States, the 2021 World Games despite Peruvian challenger Lima having vowed to include all 37 IWGA member sports was partly at the route of the problem.

This was cleverly rejected by IWGA vice-president Max Bishop, however, who claimed how Churchill also supported a system in which accountable representatives were elected to make decisions on the electorate's behalf.

While a good idea in theory, it was claimed that automatically including more sports would be unsustainable both logistically and financially at a time when it is already hard to encourage bidding cities.

The first, on the decision making powers, failed by 22 votes to 14, with one abstention, while the second received 25 no votes in comparison with 12 yes and one abstention.

The proposed constitutional changes, focusing on more minor procedural changes, were then passed with 36 yes votes and just the IFBF in opposition.

The World Games, first launched in 1981, is considered the premier event for non-Olympic disciplines to showcase themselves ahead of being added to the Olympic programme.

Wrocław in Poland is due to host the next edition in 2017 before Birmingham plays host in 2021.

Badminton, beach volleyball, trampolining, rugby sevens, taekwondo, triathlon and women's weightlifting are among events which first appeared in the World Games before gaining admission to the Olympics.

Discussion also took place at the meeting, chaired by Spain's IWGA President José Perurena, on how to build upon improved relations with the IOC ahead of the signing of a Memorandum of Understanding here tomorrow.

This is more than a "piece of paper", IOC Sports Director Kit McConnell insisted.