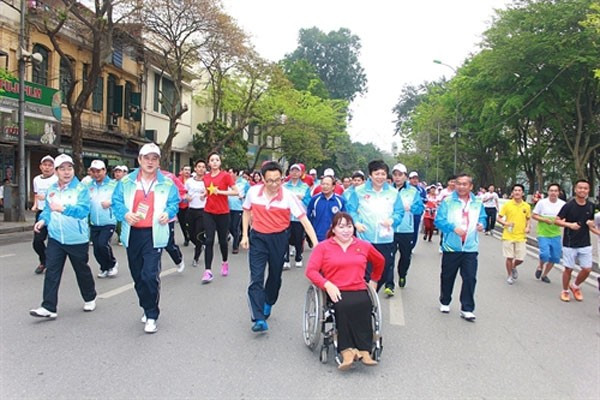 Several activities, including an Olympic Day Run for Public Health, have been held to celebrate the 70th anniversary of Vietnam Sport Day in Hanoi.

The celebration, entitled 70 Years of Vietnam Sports in the Development of the Nation, was organised jointly by the Ministry of Culture, Sports and Tourism, the Hanoi People's Committee and the Vietnam Olympic Committee (VOC).

The event started with a music and dance performance at the Vietnam Culture and Art Exhibition Centre.

After the performance, the VOC held a ceremony to honour Vietnamese athletes who had performed well in 2015.

An exhibition of the nation’s sports over the past 70 years was displayed as part of the event.

VOC officials also used the event  promote the Asian Beach Games, the largest event of the year, to be held in Danang.

There were also other activities, including motorbike and sport bike parades, mass tai chi performances, aerobics, yoga and a fair.