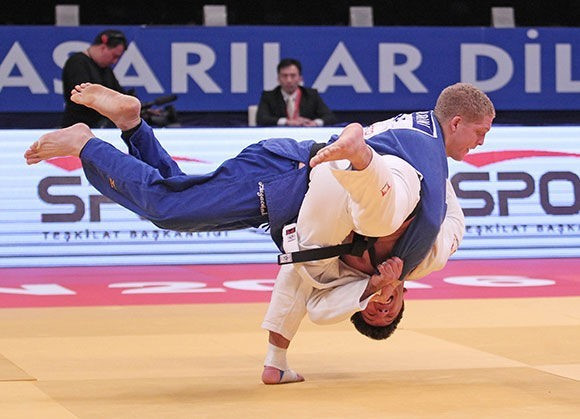 Georgia’s Beka Gviniashvili has put himself on the brink of securing qualification for this year's Olympic Games in Rio de Janeiro after winning the men’s under 100 kilograms category on the final day of the International Judo Federation (IJF) Samsun Grand Prix at the Yasar Dogu Sports Arena.

The 20-year-old, crowned junior world champion last year in the under 90kg division, faced world number 29 Rafael Buzacarini of Brazil in the gold medal match after the top seeded athletes had all suffered elimination.

The first strong attack came from Gviniashvili, who launched a powerful koshi-waza in two phases for a first yuko.

One minute before the end, the Georgian was penalised with a first shido for passivity as Buzacarini’s constant pressure started to weaken Gviniashvili’s defence.

The youngster showed his mental strength, however, to secure a victory that could go a long way towards earning him a ticket to Rio 2016.

Following on from their two gold medals yesterday, France were at it again today as Madeleine Malonga won the women’s under 78kg category and the unstoppable Teddy Riner triumphed in the men’s over 100kg.

Malonga proved too strong for compatriot Audrey Tcheumeo in the third all-French final in as many days.

As is often the case, Tcheumeo started by putting a lot of pressure on her opponent, who had to concede a first waza-ari with a well-executed sumi-gaeshi.

Within a few seconds though, Tcheumeo was penalised three times for the wrong grip and for stepping outside of the fighting area.

When the former world champion was penalised a fourth time for escaping from Malonga’s grip, her waza-ari advantage had vanished and victory went the way of her young team-mate.

As for Riner, he overcame Georgia’s Levani Matiashvili to extend his unbeaten run which stretches back as far as 2010, when he lost against Japan’s Daiki Kamikawa in the final of the Open World Championships in Tokyo.

Since then, the Frenchman has won over 80 fights, more than 70 per cent of them by ippon.

Matiashvili managed a couple of strong attacks but Riner’s pressure slowly increased and the Georgian was penalised with a shido.

There were still only two shido separating the pair with the end of the fight approaching and it was only in the last second that Riner was able to launch his uchi-mata for a yuko just on the edge of the fighting area.

Victory sees Riner claim an 18th consecutive title, despite the fact he was forced to withdraw from the Paris Grand Slam in February due to injury.

In the women’s over 78kg division, top seed and world number eight, Svitlana Iaromka of Ukraine was going well until she was defeated by South Korea’s Kim Jiyoun in the penultimate round.

The final saw Kim go up against the day’s surprise package, Melissa Mojica of Puerto Rico, who overcame top seed Jasmin Kuelbs of Germany in the semis.

A first shido was given to Mojica after a little more than a minute of the gold medal match and she was soon penalised again for passivity with Kim clearly more active.

Both athletes received a shido for passivity just before the final minute and in the last attack, Mojica was not strong enough to score.

It meant a first success since the 2014 Jeju Grand Prix for Kim, who was also joined on the podium by Iaromka and Kuelbs, the bronze medallists ahead of Ukraine’s Iryna Kindzerska and France’s Marine Erb.

The one other gold medal in Samsun was won by Russia’s Khusen Khalmurzaev, who edged sixth seed Mammadali Mehdiyev of Azerbaijan in the men’s under 90kg final to secure a first Grand Prix triumph.