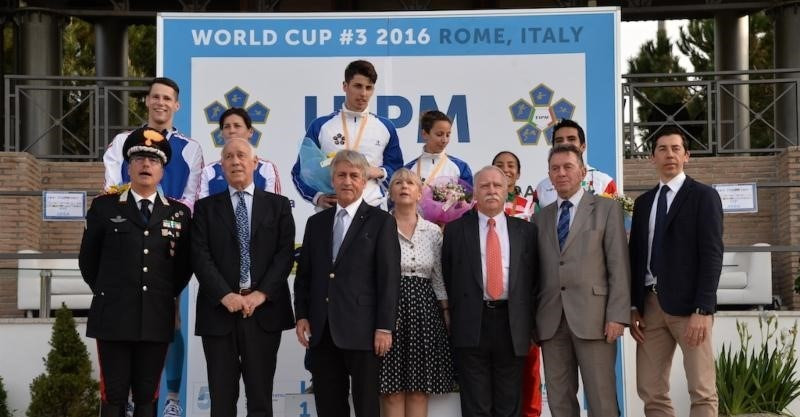 Victory ensured a second mixed relay title in three World Cup events for both Italy and Bonessio, who topped the podium alongside Auro Franceschini at the first round in Cairo.

Bonessio and Michele performed well throughout today, saving a blistering performance for the combined event that carried them to first place.

"I am very happy with these results," said Bonessio.

"I won in Cairo and in this competition, I competed with a young man and it was an exceptional result.

"This morning I was sick but it was okay because my preparation was better in this event than in the individual."

Bonessio and Michele finished third out of nine participating countries in both swimming and riding, putting them in a healthy position going into the combined event.

Bilkova and Bilko dominated for large periods, leading at the first and third shooting ranges, and they looked in good shape going into the final stages.

The Italians demonstrated greater stamina, however, and finished strongly to move confidently to the finish line.

In swimming, Kazakhstan’s Elena Potapenko and Anton Kuznetsov were easily the fastest in 1min 57.47sec, ahead of Germany’s Ronja Doring and Matthias Sandten, and Bilkova and Bilko.

The United States’ Theodore Lauzen and Samantha Achterberg kept the pressure on the leading pack with an impressive performance in riding, although they were always outside medal contention.

Sandoval and Oliver came from behind with an exceptional running and shooting performance to beat their American rivals to the bronze medal.

They had begun the combined event with a 74-second handicap against the leaders Bilkova and Bilko.

Bonessio and Michele started 14 seconds behind the frontrunners but overcame the deficit to the delight of the Italian spectators.

The fourth round of the 2016 UIPM World Cup is dueto take place in the Hungarian city of Kecskemét from April 14 to 18.

The Series is then due to culminate with the World Cup Final in Sarasota and Bradenton in America from May 6 to 8.