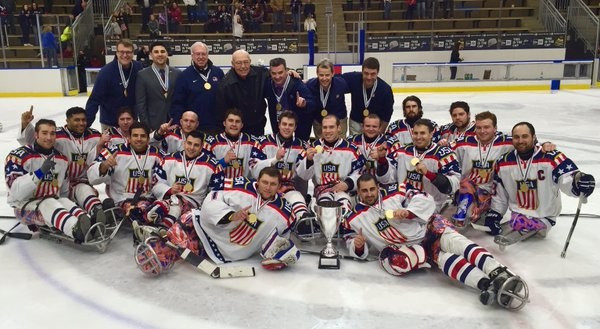 America are now the reigning Paralympic, world and Pan Pacific champions, extending their recent dominance in the sport across all tournaments.

Declan Farmer was the star of the gold-medal game as the 18-year-old forward netted a pair of impressive scores in the second period to finish his campaign with 13 goals - a new single-season record for the US national ice sledge hockey team.

"It’s a feeling of elation," said US goaltender Steve Cash.

"Every season we begin, you’ve got to get the momentum going again.

"Every season’s a fresh start beginning in August and September, so to have it culminate in something like this shows that the hard work pays off."

Following a scoreless first period that included a shot off the post by Canada’s Ben Delaney, the home team managed to find the net three times in the second.

In the space of three minutes, Farmer took a loose puck in for a score before Chris Douglas stole the puck off the draw and tucked it under the crossbar for his first goal as a member of the US national team.

Fed by line partner Brody Roybal, Farmer then fired one high to the back of the net to solidify the US’s lead with two minutes and 46 seconds remaining in the period.

Tyler McGregor, a world champion in 2013, worked hard to rally Canada in the third period, but Cash was turning away everything that came his way.

McGregor finally powered through to score from the left face-off dot with less than four minutes to go, but Kevin McKee soon hit back with an empty-net goal to increase the US’s lead back to three before the game came to a close.

Farmer was named the tournament’s best forward after leading all skaters with eight points and six goals.

Earlier in the day, South Korea escaped a late rally from Team Pan Pacific - a combined team featuring players from Japan and the other competing countries - in the final minutes to capture the bronze medal with a thrilling 3-2 victory.

The 2018 Winter Paralympic Games hosts came out firing to give themselves an early first-period advantage that would last the rest of the game.

Just four minutes and 16 seconds into the contest, Byeong-Seok Cho scored from a Seung-Hwan Jung pass for his second goal of the tournament.

About 10 minutes later, former wheelchair fencer Jong-Ho Jang found the net on a power play to double their lead.

It only took 25 seconds of the second stanza for Young-Jae Cho to extend the lead to three.

In the final period, Team Pan Pacific’s Mathieu Trudeau fired the puck past Man-Gyun Yu, before Noah Grove took it to the net off the hands of Shinobu Fukushima to close the gap to one with less than four minutes left in the game.

But Yu, who recorded 18 saves on the day, was able to hold off Team Pan Pacific’s final shot attempts to secure the last spot on the podium for South Korea.

The Pan Pacific Championships is one of two regional tournaments being held this month, with the 2016 IPC Ice Sledge Hockey European Championships due to take place in Östersund, Sweden from April 5 to 10.