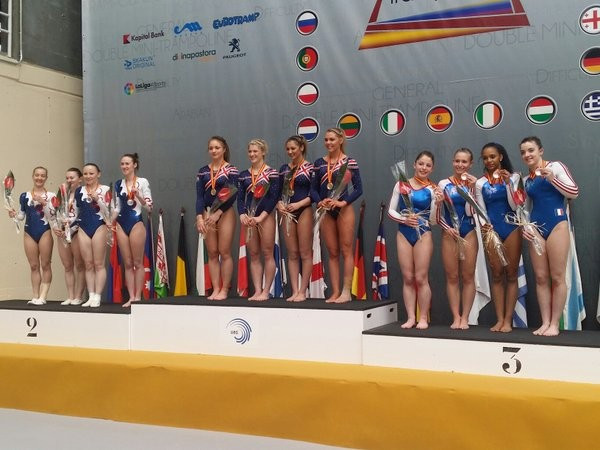 Britain and Russia secured two golds apiece as both countries continued their impressive displays at the European Union of Gymnastics (UEG) Trampoline Championships at the Pisuerga Sports Centre in Valladolid in Spain today.

The British contingent at the event had already tasted success after their women defended their team trampoline title yesterday and they built on that platform by sweeping the team tumbling finals.

The women’s quartet, made up of Rachel Davies, Lucie Colebeck, Ashleigh Long and Yasmin Taite produced a superb set of performances to clinch the crown with a score of 103,800 points.

Their total proved more than enough to finish above the Russian team, comprised of Anna Korobeinikova, Anastasiia Isupova, Natalia Parakhina and Viktoriia Danilenko, as they amassed 102,400 points.

Britain’s men then followed in the footsteps of their female team-mates as the team of Kristof Willerton, Greg Townley, Michael Barnes and Elliott Browne were awarded a combined 114,600 points.

The parallels with the women’s competition continued as Russia were again forced to settle for silver, Tagir Murtazaev, Timofei Podust, Grigory Noskov and Aleksandr Lisitsyn ending on a score of 113,600 points.

Russia got their revenge in the double mini trampoline team events, with both their men and women reigning supreme.

Spain had some success of their own to cheer as Daniel Perez, Antonio Santos, Carlos Manjon and Alejandro Bernardez earned the bronze medal on 109,100 points.

It proved to be a similarly dominant victory for Russia’s double mini trampoline women’s team, made up of Polina Troianova, Anastasiia Ignateva and Vladislava Rhyzkova, who breezed to gold with a total of 100,300 points.

Spain marked their first-ever appearance in the discipline with a silver  medal, thanks to Yael Campelo, Claudia Prat, Nuria Aules and Sara Aparicio registering 98,100 points.

Britain’s Kirsty Way, Caitlin O’Brien and Ciara Donlevy added to their country's medal haul with a bronze medal on 97,400 points.

The event is due conclude tomorrow with the individual finals.