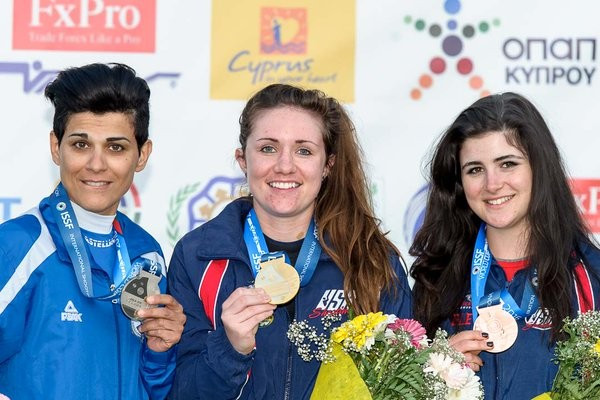 The American, the leader in the world rankings, upset the home crowd by beating local hero Andri Eleftheriou in the gold medal match.

Twenty-two-year-old Craft, who won World Championship gold in Lonato last year, gave her opponent no chance by hitting all 16 of the targets contested.

Eleftheriou didn't fare much worse but missed one target on section four and the 31-year-old Cypriot had to settle for silver.

Craft is assured of a place in the United States team for Rio 2016 and has set her sights on Olympic gold.

“The pressure is off, to make the Olympic team," she said.

"It was such a relief to make the team at last year’s World Championship.

"Making it into the team for Rio was a goal of mine for the past eight years.

"Over the next three months I will be competing at the Rio test event and at the ISSF World Cup in San Marino, trying to get as much experience as I can before the Games, because I feel that makes me better.

“Today it was great, overall.

"Considering that this is the first World Cup of the year, I couldn’t be happier."

The teenager, competing in her first World Cup, was too strong for her Slovakian opponent and paid tribute to her coach Vincent Hancock, the back-to-back men's skeet gold medallist from Beijing 2008 and London 2012.

"Craig is a great coach, I give him so much credit for everything I have been able to accomplish," she said.

"Today’s competition has been amazing."

The World Cup in Nicosia will continue tomorrow with the men's trap qualification round.

The final will be held on Thursday (March 24) to conclude competition.