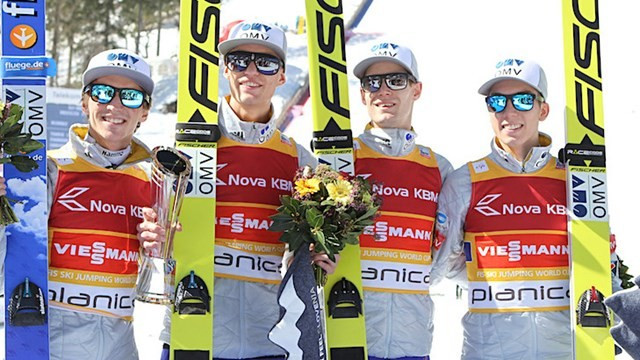 The Norwegian quartet, which included Johann Andre Forfang and Daniel Andre Tande, lead narrowly after the first round of the competition after achieving a score of 809.7 points.

Slovenia were hoping to complete the season in style in front of their home fans and the individual World Cup winner Peter Prevc put them into contention by leaping 229.5 metres with his first effort.

It helped his occupy second place at the halfway stage of the competition on 800.4 points.

Fannemel and Gangnes looked to put the Norwegian team out of Slovenia’s reach in the second round of jumps, posting 233.5m and 239.0m respectively.

Their triumph was sealed when Forfang, third in yesterday’s individual event, leapt to 233.5m.

It gave the Norwegians a final score of 1627.4 points, leaving them end comfortably clear of Slovenia, who ended on 1569.0 points.

Prevc gave the home crowd something to cheer after producing the longest effort of the day in the final round, the world champion achieving a distance of 246m.

"But the other guys are in a great shape at the moment and that makes it fun to be on this team."

Austria earned the final podium position after finishing the event with a total of 1568.9 points.

The Japanese team had to settle for fourth position, achieving 1477.2 points.

The World Cup will officially draw to a close tomorrow after the final individual event.