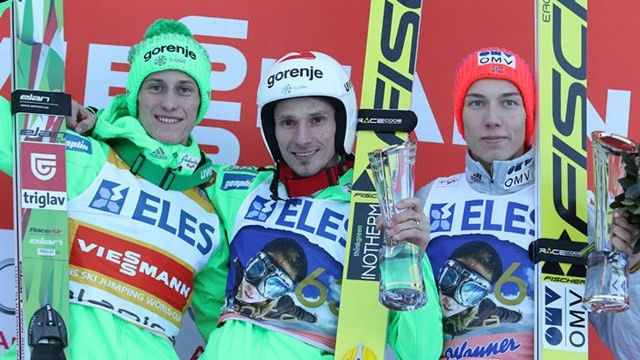 Slovenia were once again dominant on home snow today at the International Ski Federation (FIS) Ski Jumping World Cup in Planica when Robert Kranjec triumped ahead of his more established compatriot, Peter Prevc.

Kranjec jumped 224.5 metres in the first round before a second leap of 236m to give him an impressive total haul of 447.6 points.

It proved enough for a second World Cup victory of the season in front of 25,000 partisan home fans.

"I wasn't sure that my second jump would be good enough to win," he said.

"But now i'm really happy that I could beat Peter today because he is jumping great this season.

"My goal now is to finish second in the Ski Flying World Cup."

Prevc, winner of the World Cup event yesterday and who has already claimed the overall season title, only managed 218m in round one.

His world-class credentials came to the fore, however, with a monumental second effort of 242m to give him 440.5 points overall.

It ensured his 21st podium finish in his 28th individual competition this season.

He has now scored a record of 2,203 World Cup points this season.

Third place went to Norway's Johann Andre Forfang, who produced jumps of 223.5m and 233.0m to come in only 0.7 points behind Prevc

The season is due to end with a team competition in the Slovenian resort tomorrow.