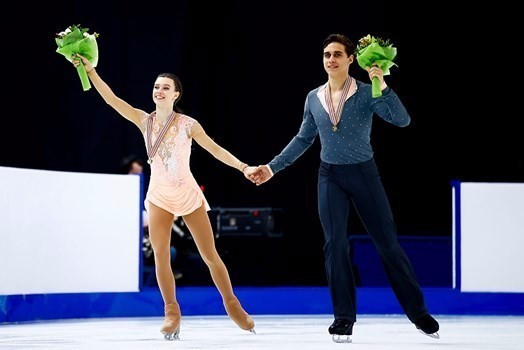 Czech Republic’s Anna Duskova and Martin Bidar built on their overnight lead to claim the gold medal in the pairs event at the International Skating Union (ISU) World Junior Figure Skating Championships at the Főnix Arena in Debrecen.

After an excellent display in the short programme yesterday, the Lillehammer 2016 Winter Youth Olympic Gmaes silver medallists had a commanding five point advantage over their nearest rivals, Russia's Anastasia Mishina and Vladislav Mirzoev.

Their routine also saw Duskova and Bidar achieve level four lifts and two level-four spins, which helped them to achieve a personal best score of 117.11 points.

It helped them to finish on a gold medal winning tally of 181.82 points, with Mishina and Mirzoev taking silver on 172.60.

The podium was completed by another Russian pairing, Ekaterina Borisova and Dmitry Sopot, who ended 14 points clear of Ukraine’s Renata Oganesian and Mark Bardei to win the bronze medal with a score of 169.00 points.

“For next season we want to try the seniors,” said Bidar after the victory.

"It will be very hard, because there are three lifts in the free skating and we have to improve.”

At the halfway stage of the ice dance competition, the United States’ Rachel and Michael Parsons top the standings, following an strong short programme.

The brother and sister combination achieved a personal best score of 67.88 points.

They will expect to face competition, however, from their team-mates and ISU Junior Grand Prix Final winners Lorraine McNamara and Quinn Carpenter, after they scored 66.25 points.