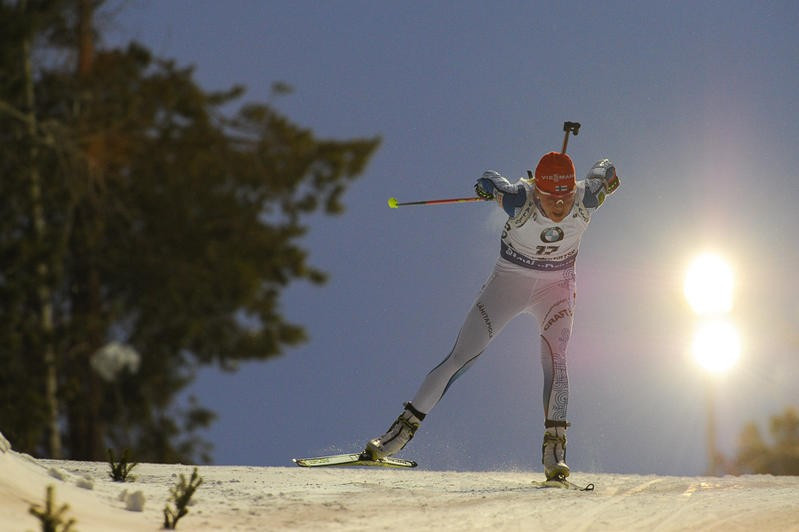 The 33-year-old had won in the sprint last year and began her pursuit of back-to-back wins impressively by shooting clear at the prone range to move into an early lead.

Her advantage was threatened by the Czech Republic’s Gabriela Soukalova and France’s Marie Dorin Habert, who claimed three gold medals at the World Championships earlier this month.

Mäkäräinen’s challenge appeared to have faltered during the standing station as she picked up a penalty, while Dorin Habert also missed a shot to dent her chances of victory.

It left Soukalova with the opportunity to claim victory after she shot clear again, but the Czech collided with a fellow biathlete and lost several seconds, which would prove crucial at the finish.

As a result Mäkäräinen was able to claim the victory, with a blistering final loop seeing her finish in a time of 20 min 42.30 sec.

Soukalova, who failed to secure a podium finish at the World Championships in Oslo, was forced to settle for second after crossing the line in 20:45.10.

The bronze medal was claimed by Norway’s Marte Olsbu, after an impressive performance saw the 25-year-old finish 4.8 seconds behind the winner to earn the first World Cup podium of her career.

"I am a little surprised that it is possible to win the race with one penalty,” Mäkäräinen said afterwards.

“It was great to win a medal on the last day in Oslo, I was also quite tired, but I slept until 12 o'clock, I think it was my key to victory today."

Although she only picked up one penalty Dorin Habert eventually finished in 10th position, with the 29-year-old ending 44 seconds off the pace of Mäkäräinen.

Competition is scheduled to continue tomorrow with the men’s 10km sprint event.