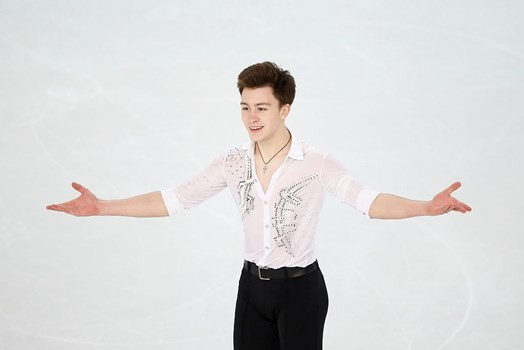 The 16-year-old produced an excellent display in the short programme event, which got the Championships underway, by delivering a triple Axel, triple flip and triple Lutz-triple toe during his routine.

Aliev, who claimed silver at the ISU Junior Grand Prix Final in December, was rewarded for his display with a personal best score of 80.74 points from the judges.

“I rate my performance today at a good level, I was able to cope with my nerves and my emotions,” said Aliev, who won team gold at the Lillehammer 2016 Winter Youth Olympics.

“I was able to keep the focus from the morning until the actual performance.

“I’m glad that everything worked out for me.”

The Russian duo will expect to face competition from Latvia’s Deniss Vasilijevs and the United States’ Vincent Zhou in the free routines, after they finished on totals of 78.78 and 77.31 respectively.

Anna Duskova and Martin Bidar were able to push Russia into second place in the junior pairs short programme, with the Czech skaters receiving a points tally of 64.71 points from the judges.

Their personal best effort came after their routine included a double Axel, triple twist and throw triple Salchow, while they also received a level four score for their lift, pair combination spin and step sequence.

The pairing are five points clear of their nearest challengers Anastasia Mishina and Vladislav Mirzoev, with the Russians having scored 59.50 points.

The junior short ice dance will also be held tomorrow.