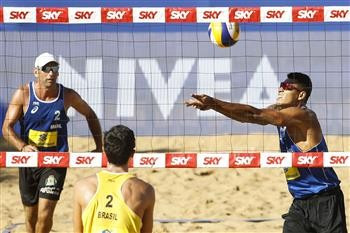 "What a relief," said Araújo, who won top honours at the 2005 Beach Volleyball World Championships in Berlin alongside Fábio Luiz Magalhães.

Three years after capturing the world title, Araújo and Magalhães finished runners-up at the Beijing 2008 Olympic Games after losing to the United States’ Phil Dalhausser and Todd Rogers in the gold medal match.

Prior to playing with Magalhães, Araújo played in 50 FIVB World Tour events with Benjamin Insfran.

"I really wanted to make the main draw as this is where my former partner Fabio works as an official in the Sports Ministry," added Araújo.

"It will be good to see him along with playing here again in Vitória."

Saymon Barbosa and Guto Carvalhaes, who were seeded 15th in the qualifier, won the last match of the day over second-ranked Latvian pair Martins Plavins and Haralds Regza to ensure the hosts Brazil will be represented by five teams in the main draw.

Other men's teams advancing to the main draw are top seeds Murat Giginoglu and Volkan Göğtepe of Turkey and third seeds Jefferson Santos Pereira and Cherif Younousse of Qatar.

Pool play starts tomorrow for both genders as the FIVB World Tour returns to Vitória for the first-time since 2006 in the build-up to the Rio Olympics in Brazil.

After two days of pool play, the top three teams from each group will advance to the elimination phase.

Two elimination rounds are due to be played on Friday (March 18) with the men’s and women’s quarter-final matches set for Saturday (March 19).

The medal matches are scheduled for Sunday (March 20).