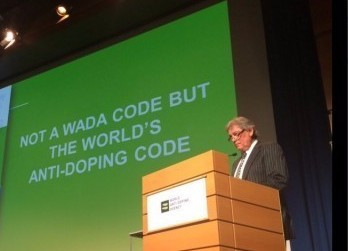 Speaking during the WADA Symposium in Lausanne, Howman claimed a retesting process should begin now, long before the expiry of a 10-year Statute of Limitations.

It follows the WADA Independent Commission highlighting concerns that the "impartiality, judgment and integrity were compromised by the surveillance of the Russian FSB within the laboratory during the Sochi Winter Olympic Games".

Commission chairman Richard Pound said in November that he "does not think we can be confident there was no manipulation of results at Sochi 2014".

The International Olympic Committee (IOC), the body responsible for all re-testing, have denied that there were any problems and claim all procedures were followed closely at Sochi 2014.

Howman speculated whether some of the samples taken in the Russian coastal resort could show traces of substances still undetectable two years ago.

"Some ought to be tested now rather than wait because of the information we know now," he said.

Retested samples from the Turin 2006 Games are still yet to be released by the IOC, while a process is currently ongoing to re-evaluate Beijing 2008.

IOC medical director Richard Budgett did not refer to Sochi 2014 samples during the Symposium, but did claim that hundreds of athletes who competed London 2012 will have their samples retested using new technology ahead of Rio 2016.

Athletes from specific sports and countries where suspicions have been raised are being targeted, Budgett said, with those likely to compete at Rio 2016  a priority.

Improved tests have emerged to detect various substances in the last three years, including one to detect specific peptides, which release human growth hormone.

“We are working very closely with WADA and we have agreed with WADA exactly which sports and which countries we are targeting," he told The Times.

“It is going to be athletes who are likely to be competing in Rio and for very specific analyses where there has been an advance over the last four years.

"It will be based on intelligence.”

It comes as WADA President Sir Craig Reedie vowed to "reanalyse" the Independent Commission report to see if they should widen their investigation beyond Russian athletics.

WADA Athletes' Commisssion chair Beckie Scott, a former cross country skier and IOC member from Canada, called for such a widening last week, claiming comments in the "incriminating" report justified investigating other sports in Russia, as well as athletics programmes in other countries.

Sir Craig claimed to have spoken with Scott and promised to "re-engage" with Pound and the other Independent Commission members.

"We must pick our battles wisely based on hard evidence," the Briton said.

The World Olympians Association has added its voice to these calls today, welcoming what it describes as "the promise from WADA to re-analyse the initial report and re-engage with the enquiry team".

“With the best interests of clean athletes and the integrity of global sport at heart, WOA fully supports the calls by the WADA Athletes’ Committee to extend the mandate of the WADA Independent Commission to other sports and countries," said WOA President Joel Bouzou.

"We also welcome the response from WADA to re-analyse the initial report and re-engage with the process.

“As stated by the WADA Athletes’ Committee, the response to date to the Independent Commission report has been unsatisfactory and has not gone far enough to protect clean athletes.

"WOA therefore fully backs the call for a wider investigation as a sign of greater commitment to protecting the integrity of global sport and ensuring the interests of clean athletes are ferociously protected."