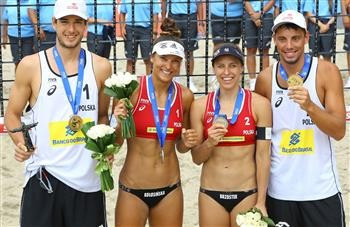 Kantor and Losiak, seeded 23rd, had to come through qualifying to reach the main draw of and they secured their ninth straight win in the tournament to take the crown by beating the Brazilian pair 21-19, 23-21.

The victory for the duo saw them become only the second Polish team to secure a FIVB World Tour gold medal, following in the footsteps of Grzegorz Fijalek and Mariusz Prudel, who they edged to reach the final.

Their team-mates topped the podium in The Hague in The Netherlands in 2004.

Kantor and Losiak remain in top spot on the overall World Tour standings on a total of 2,280 points, with Americans Phil Dalhausser and Nick Lucena second on 1,930.

Fifth seeds Alexander Brouwer and Robert Meeuwsen of The Netherlands claimed bronze thanks to overcoming Fijalek and Prudel, who are the highest ranked team from their country going into the Rio 2016 Olympic Games, 19-21, 21-19, 20-18.

“We are still young and learning with each match,” Losiak said.

“Today, we were more focused against the Brazilians as compared to Norway.

“There, we were more nervous and were not very focused - today was our day to shine.”

Three-time Olympic gold medalist Kerri Walsh Jennings and April Ross surged to the women’s title as they claimed a comfortable 21-15, 21-13 win over Poland’s Kinga Kolsinska and Monika Brzostek, who were unable to replicate the achievement of their men’s team.

Jennings, who was competing in her first event since she underwent shoulder surgery last year, and Ross proved far too strong for the Polish pair, wrapping up a confident success in just 31 minutes.

Britta Buthe and Karla Borger of Germany were able to end the event at the Rio 2016 beach volleyball venue on a positive note as they earned bronze with a 21-18, 18-21, 15-10 triumph against Switzerland’s Anouk Verge-Depre and Isabelle Forrer.

“When we started out it was almost beginner’s luck - two athletes, two individuals coming together just playing ugly and winning,” Walsh Jennings said.

“We had to find us within that.

“When you start out so high, there’s always going to be a middle part.

“The middle part for me lasted a little bit too long but that’s because our standards are too high.”