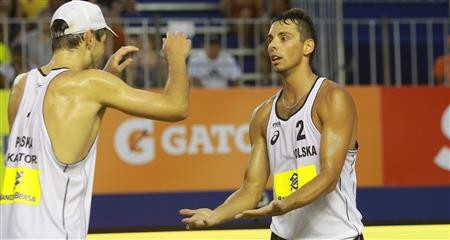 Piotr Kantor and Bartosz Losiak have proved to be one of the pairings to watch throughout the men’s competition, having won all of their matches to date, with their run continuing thanks to a 21-19, 21-18 win over American Maceió Open winners Phil Dalhausser and Nick Lucena.

That quarter-final final victory assured Poland of having a team in the men’s final, as Kantor and Losiak set up a last four clash against their compatriots Grzegorz Fijalek and Mariusz Prudel.

The three-time FIVB youth champions stretched their winning run to eight games by defeating their team-mates 21-17, 23-21.

“We are very happy with the win and very pleased with our performance,” Losiak said afterwards.

“We had never defeated our Polish rivals on the world tour, so tonight's win is very important for us as we move forward in securing a spot to return to Rio for the Olympic Games.”

They are now set to meet the home favourites Evandro Goncalves and Pedro Solberg after they overcame The Netherlands’ Alexander Brouwer and Robert Meeuwsen.

The Dutch pairing had beaten Brazil’s world champions Alison Cerutti and Bruno Oscar Schmidt 27-25, 21-19 in the quarter-finals and were hoping to repeat the feat in the semi-finals.

Kinga Kolosinska and Monika Brzostek made it two Polish teams in gold medal games after they battled to a 21-13, 13-21, 15-13 victory over Switzerland’s Anouk Verge-Depre and Isabelle Forrer.

The duo had benefited from Canada’s Sarah Pavan and Heather Bansley withdrawing from their quarter-final earlier in the day due to injury, but will now be looking forward to their first major final.

They will take on America’s Kerri Walsh Jennings and April Ross, after they defeated Germany’s Britta Buthe and Karla Borger 9-21, 21-17, 15-10.

Both the gold and bronze medal contests will take place tomorrow at the venue, which is due to host competition at the Rio 2016 Olympic Games.