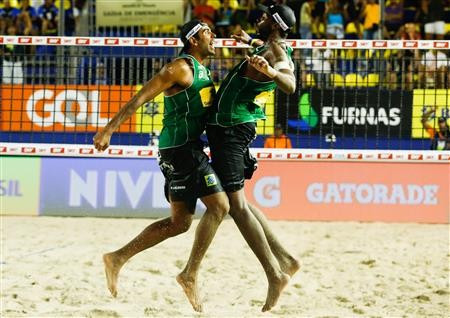 The top seeded pairing were given a tough test in front of a home crowd at the Copacabana Beach, which will host beach volleyball competition at Rio 2016, with the Brazilians wrapping up a lengthy opening set 26-24.

Schalk and Saxton struck back to win the second 21-17, but were unable to claim a comeback win as Alison and Bruno clinched the decider 15-12.

They are now set to meet 2013 world champions Alexander Brouwer and Robert Meeuwsen in the last eight of the competition, after the Dutch duo claimed a 21-15, 21-17 win over America’s Jake Gibb and Casey Paterson.

Pedro Solberg and Evandro made it two Brazilian pairings in the final eight of the competition as they sealed a battling 21-17, 12-21, 19-21 win over Russia’s Konstantin Semenov and Viacheslav Krasilnikov.

“He is incredible, he is amazing,” Pedro said of his team-mate Evandro.

“His serves got us back in the game as the Russians were really in control of the final set.

After losing their final pool match yesterday, America’s Phil Dalhausser and Nick Lucena got back to winning ways as the Maceió Open winners defeated Italy’s Alex Ranghieri and Adrian Carambula 21-15, 21-18.

Competition is due to continue tomorrow, with the quarter and semi-finals scheduled to take place.