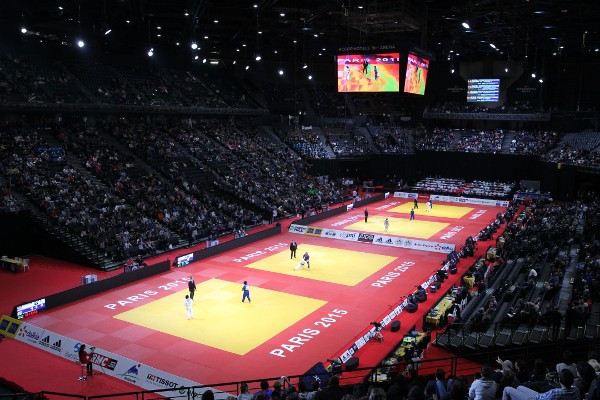 A record crowd of more than 10,000 is expected at the AccorHotels Arena tomorrow and Sunday (February 7) for one of the biggest events on the International Judo Federation (IJF) calendar.

The event started in 1971 when a group of French officials were inspired after attending a tournament in Tbilisi, then in the Soviet Union but now the capital of Georgia.

The fields will include four Olympic gold medallists from London 2012, who appropriately include Georgia's Lasha Shavdatuashvili, winner of the under 66kg category in the British capital.

Six world champions are also due to compete in a stadium originally known as Palais Omnisports de Paris-Bercy and formerly Bercy Arena.

One disappointment for the crowd, though, is the withdrawal of Teddy Riner, one of the country's most popular sportsmen.

The Frenchman, winner of the Olympic gold medal in the over 100 kilogram category at London 2012 and an eight-time world champion, was forced to pull out earlier this week with a shoulder injury.

In his absence, local interest is likely to focus on Olympic bronze medallist Priscilla Gneto, 24, and her younger sister Astride Gneto, 19, who will compete in the same weight category and international competition for the first time tomorrow.

Priscilla is one of France’s star talents and stepped up her Rio 2016 ambitions last year with three consecutive Grand Slam bronze medals.

Fellow under 52kg judoka Astride is the reigning European junior champion and world junior bronze medallist and will be competing at her home event for the second time.

“My mum is very anxious about Saturday,” said Priscilla.

“Each of our battles are driving her crazy.

"Besides, she always closes her eyes when she watches us fight.

"The worst thing would be for my parents to see us fight against each other.

"Seeing us fight and meet international judokas makes him happy.

“My parents have just arrived now to be with us and to give us a lot of hugs and motivation.”

Other Olympic champions competing here include Kayla Harrison, winner of the under 78kg at London 2012, making her the first American female to win a gold medal.

Sarah Menezes, the under 48kg champion from London 2012, is another who will be fine-tuning her preparations for Rio 2016 in a year when pressure is likely to slowly increase on her as one of Brazil's main hopes for an Olympic gold medal.

All the competitors will be hoping to ride on the atmosphere that this event is well-known for producing in an intimate setting before a crowd widely considered to be among the most knowledgeable in the world.

Since being introduced to France in 1935 by Japan's Mikinosuke Kawaishi, judo has become one of the country's most popular sports.

A recent survey estimated that 800,000 take part in the sport.

This tournament will also be an early opportunity for Paris to show its support for the French capital's bid to host the 2024 Olympics and Paralympics.

Jean-Luc Rougé, President of the French Judo Federation and general secretary of the IJF, predicted that, with vital Olympic qualifying points available here, there would be extra tension in the air.

"This tournament is at the start of the Olympic year and it’s a very important time," Rougé, the 1975 world champion in the under 93kg division, said.

"I wish good luck to you all.

"I know how important it is to be selected for the Olympic Games.

"Good luck to develop judo in your country and the world.

"The stadium is not a sports venue this weekend but instead a dojo where we will show friendship and all of the values of our sport which is a great educational tool.

"The best will become the winners in Paris.”