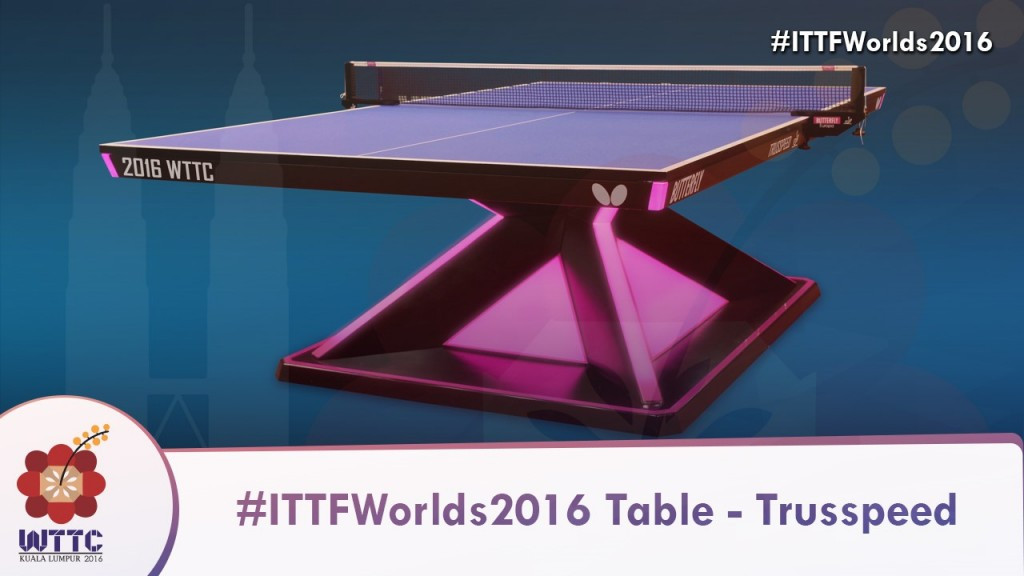 This year's World Team Table Tennis Championships will be played on a "stronger and bolder" table, according to the sport's governing body.

Table supplier Butterfly have released their "Trusspeed" design for the event in Malaysia's capital Kuala Lumpur, which will take place between February 28 and March 6.

It features pink lighting and a surface which it is hoped will lead to an entertaining spectacle.

"The best table tennis players on earth will all battle it out on the newly unveiled Trusspeed table which Butterfly believes will be the perfect table for quick, exciting rallies to enthrall the global audience," said a statement from the International Table Tennis Federation (ITTF).

"The Trusspeed table is different from past Butterfly tables, as it steps away from its round and curved undercarriage to a stronger, and bolder design.

"The pink fluro lights on the attractive Trusspeed table reflects Butterfly's corporate colour and its revamped logo which was launched in 2014."

"This year is no exception and with great co-operation between all our suppliers, we have even taken it an extra step further this year to present a new field of play colour scheme which matches very nicely with the Butterfly equipment."

Butterfly also supplied the tables at the 2009, 2012 and 2014 ITTF World Table Tennis Championships.

This year's team event will feature 24 men's and 24 women's sides in two competitions.

China will begin as the overwhelming favourites to win both the men's and women's titles, having achieved the feat at the last two editions of the biennial event in Dortmund and Tokyo.